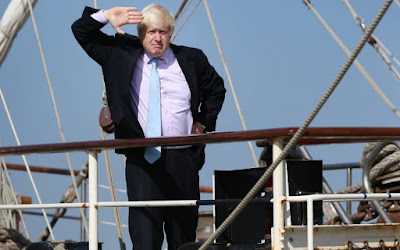 Poor old Boris Johnson has not been greeted well by the foreigners for whom he is supposed to act as Foreign Secretary in our government.  It has long been the case that the reality of the Foreign Office is that it is there for them to tell the Brit's what to do. They say he is unsuited to this task.

But there just might be something in the genes that may give him help.  Normally, when posting on matters relating to family history I like to be sure of the lines and basics but in the case of Bojo, perhaps some speculation could go a long way.  After all Bojo himself is not averse to a little embroidery of his life story.

It arises from that grand old English name Scattergood turning up.  Really, you could not invent a better one.  If James Fawcett and Edith Annie Scattergood are in there then it can be very interesting.  Who needs aristocracy and the more doubtful members of the Royals when you have a family like this?

Bojo, as we know is and has been big on property.  Indeed, he has upset many by permitting swathes of central London to be replaced by skyscrapers built and financed by his chums.  All those lovely old brick built streets, where did the bricks go or more to the point where did they come from?

Because we have Scattergood brick makers.  Admittedly, the bricks of late 18th and early 19th Century London were very likely to have come from the many south east sources and perhaps only specialist types from elsewhere.  But Bojo's brick makers were West Midlands.

This history tells us  about those of Shropshire and is a full account of the industry and trade in those parts.  Down in West Bromwich the way they were made and traded would be much the same.  So were Bojo's people moulders or pushers?  I think we should be told, you know a man by his trade.

So if you are tempted to chuck a brick at Bojo, at least try to source an antique one of the period.  He might be fussy about these things.  But to move on to the further shores of speculation.  What other Scattergood men were at least in his family connections although not direct ancestors?

Two of my ports of call in such cases is to go to the Waterloo Medal Roll and the Trafalgar Roll.  It is my view that during the wars against Napoleon the proportion of the male population who served one way or another was comparable with the First and Second World Wars.  Also, the primary sources often tell a different story from the later histories.

At Waterloo in 1815 an Edward Scattergood was with the 52nd Regiment of Foot which was brigaded with the 95th (see Sharpe's Rifles of TV) and put Boney's Middle Guard to the bayonet.  Then there were a John and a Thomas in the 2nd Battalion of the 3rd Foot Guards who were at the Hougoumont Farm defence, a critical phase of the battle.  If any men did for Bonaparte, they did.

Earlier there was the William Scattergood at the Battle of Trafalgar in 1805.  Not just at the battle but a red coated Royal Marine Private in the thick of it on deck or in the rigging of the flagship HMS Victory.  He survived, being discharged in 1816.  So in those portraits of the death of Nelson, those in red coats are the Marines, could one have been William?

When Ms May discusses how to handle the French with Bojo, she might remind him that England expects every man to do his duty.