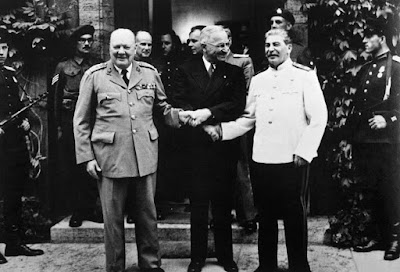 The past can be a surprising place in many ways.  The Guardian has been running stories about people who were in a place somewhere or with someone that was significant at the time.  The theme is that this was something you did not think was likely.

This story from 1945 caught my eye.  It is of an 18 year old young lady from England meeting Joseph Stalin, who ruled the Soviet Union, at the Potsdam Conference in Berlin.  It is such a simple story in many ways, that in itself is a surprise.  Yet she was present at one of the major turning points of history.

But stop and think, this young lady, I repeat all of 18 years, was one of six secretarial staff who were with Prime Minister Winston Churchill at the Potsdam Conference with Stalin and President Truman of the USA.

It is not only that she had to be good at her job, she had to be in the one of the very best at the time with the capability and experience to keep at the work and the expertise to cope with the need for the highest standards.

This seems unusual, but in this period there were a great many people in their late teens across the labour force and in the armed services doing responsible and demanding jobs entailing ability, skills and intelligence for whom university was regarded as unnecessary, in fact an irrelevance.

It was a "noble idea" that now wastes years of peoples' lives, has denied the labour market of key labour and has created a political monster which saps our resources, has never ending demands for extra money and whose influence is ever more destructive.

Time to cull the colleges and universities?