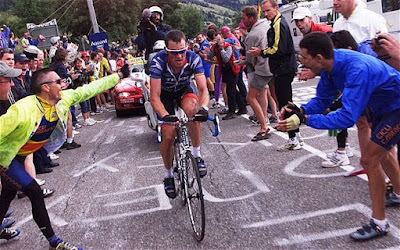 Today is the last day of the French Annual Festival of Exhibitionists, Fruitcakes and assorted Deranged Persons from across Europe.  They come in their thousands to be there and enjoy unlimited access to TV coverage now beamed around the world.

Thrown into this mix of anarchy and idiocy are around a couple of hundred men on bicycles to give a focus for the various activities.  During the festival they cycle over two thousand miles or so (albeit in kilometres) up hill and down dale, in and out of towns and sometimes around in circles.

This is The Tour de France, designated a sport, and is marketed as the leading cycle race of the world, if not the oldest.  The winner is deemed to be the man who takes the least time to cover the distance, modified by various time bonuses, penalties for infringements of the rules, where the crashes occur and other sundries that might occur to The Jury.

The administration and organisation of this is all very French, which is not a compliment.  But it can make compulsive viewing.  What is a delight is the extensive showing of the countryside and the terrain.  Often just turn the sound off and watch the pretty pictures for a restful TV hour or so.

The trouble is when the TV is on key points in the ride of the day and all the Festival followers congregate to get in the way, run alongside the riders, make for the cameras, howl and rage and generally behave like the mob enjoying an afternoon with Madame Guillotine.  This is not civilisation as we know it, Jacques.

Having toddled around France a time or two, what intrigues me are the Festival followers etc. who manage to turn up each day on screen.  At one time, back in the 80's they were limited in number, now there are hordes of them.  It must take immense time, effort, cost and trouble to do this.  Those with the very large motorised caravans will have made a major investment.

It is a sobering thought, although I doubt whether many of them are sober.  When does the Premier League football start?