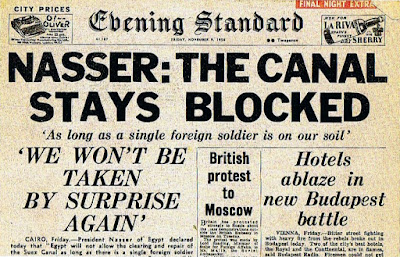 Guido Fawkes web site points to Vernon Bognador in the "Telegraph" who reminds us that is now exactly sixty years ago since The Suez Crisis moved into top gear with all the later consequences.

Not least a Prime Minister lost because of the bungling (what? another one?) but because it marked the change that had taken place in the UK's role in the world.

The theme of his article is not to rehearse the past but to say that in the ensuing decades we have still not found a real answer to the question of what to do with a rogue or demented dictator, especially in the Middle East, where there has been a good many of them.

With the end of the Pax Britannica and the waywardness of the Pax Americana and lost hope of a Pax UN there have been many attempts to deal with these dictators.  One would like to think good and bad but in reality it has been bad and worse.

For me the Suez Crisis is not something from way back history, it is still living memory.  One thing I recall is being with groups of reservists, former regular soldiers who after service were contracted to a number of years on the reserve.

They had no wish to be recalled leaving jobs, families and financial commitments to sort out another mess in the Middle East.  They like many others in the Army, regarded the Suez venture as a bad business.  National Servicemen due for demob' were facing delays and extension of service in some cases.

The surprise was that more mutinies did not occur, but perhaps the rigour of discipline and the potential penalties deterred most of us.  The military prisons of Bielefeld, Colchester and Shepton Mallet were no place to spend your younger years and few emerged from them with their sanity intact.

This post from last November 24th on this blog has a lot to say about it all.  One aspect that is not there nor referred to in most discussions is that at the time the politicians were still in the shadow of the Iran Crisis of 1951, the nationalisation of oil by Iran and centred on the refinery of Abadan.

In the election of October 1951 when the Tories took over from Labour, this was a major issue.  Despite Labour polling their highest vote ever the Tories won by a slender margin of seats. So when Prime Minister Eden was faced by President Nasser of Egypt and his nationalisation plans for the Suez Canal it was seen as critical.

What the present government may be faced with that might come out of the blue on the Middle East is hard to predict.  How well they might respond or how badly is the question.  If the past is any guide there is only one answer, another debacle.