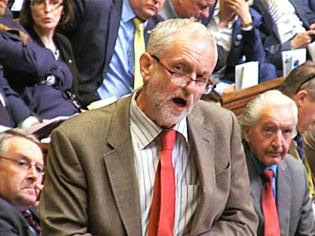 Born before the air raids of Madrid and Guernica and a child of the Blitz and the nuclear age my memories and experience have left me with many uncertainties.  So the latest debates about Trident and its missiles are nothing new.

After the Army,  where I handled high security files in a key field formation, I was in London for the high days and clamour of the Campaign for Nuclear Disarmament.  At my place of study when CND paraded only a handful of us were not among them.  We did our best to maintain the bar takings in their absence.

Consequently, the present debate about Trident is one that I have mixed feelings about, not least, I wonder, how much of my taxes have gone to keep it going.  Is it a necessity?  Is it needed to claim a place at the table of Great Powers?  Is it past its time?  Or is it a large long established job creation project?

This week the debate has been muddled up with the status of the Leader of the Opposition and the vote to be taken about whether Jeremy Corbyn should be replaced.  In the picture above he is on his feet in the House of Commons but what is interesting to me, at least, is that Dennis Skinner is at his left hand.

Around four decades ago, I recall an occasion in a former stately home in South Yorkshire when the great and good of the Labour Trade Unions and Left had come together for a conference.  Claiming trade union status, of a sort, I had turned up and blagged my way in for the good free food and hospitality.

At one stage the talk shifted to whether the then Labour Government could be "persuaded" to agree to nuclear disarmament.  The only other person in the place who said nowt and kept his head down was Roy Mason, in The Cabinet at the time.  Times, it seems, do not change.

Dennis was for banning and total disarmament, a prophet before his time.  In the UK we are almost there for total, apart from Trident, and he has had little to do with it.  It is not owed to the Left or to the humanity first groups, it is down to the short termism, financial operations and the wishful thinking of our politicians.

It is said we might need to keep Trident because we have little or nothing else to call on.  But as for times changing the relevant questions might.  One is who is to be nuked?  Are we still talking Russia, or are there others who could be on the target list?