July 1916 The Somme - The Liverpool Pals 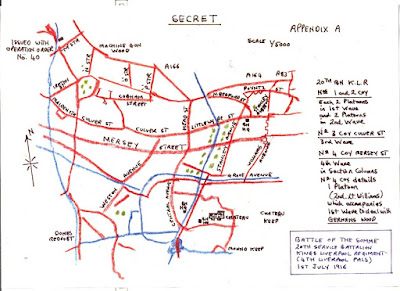 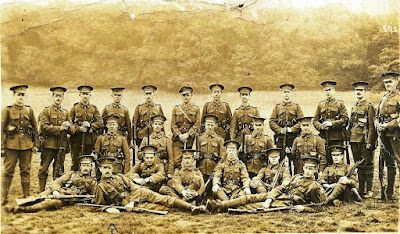 THE LIVERPOOL PALS - THE SOMME JULY 1916

There were four battalions of Pals in the Kings Liverpool Regiment, the 17th, 18th, 19th and 20th who formed a Pals Brigade in the 30th Division at The Somme.  To them might be added the Liverpool Scottish http://www.liverpoolscottish.org.uk/ and the Liverpool Irish battalions of The Kings.

This is from the war diaries of the Pals Brigade, the map above is of the trench lines they occupied.

15 July congratulatory messages to the 30th Division from Lord Haig, and the Earl of Derby (Corps Commander), Maj-Gen JCM O’Shea promised they would attack again.

The Battle of The Somme has been extensively researched and is the subject of a literature of its own, as well as bitter debate about its inception, planning, conduct, and consequences.  This is not the place to attempt any analysis or comment.

It is enough to say that the 30th Division, and the Liverpool Pals attained their objectives early in the day, and with light casualties.  That here and at some other places along the line breakthroughs that were made were not taken advantage of or the attack pressed forward and supported meant that the opportunities were lost.

The Pals Brigade did attack again and paid a heavy price a few days later.

There was a high incidence of other casualties, a large number of men sent to the rear and later to England for treatment and convalescence.

Of those who returned to combat some were posted to other battalions in the Kings, notably the 13th KLR in 3rd Division (The Iron Division).

The picture includes my grandfather who served in the 20th Battalion, the 4th Pals.  He was injured on 30 July 1916 and was posted to the 13th Battalion on his return to France.