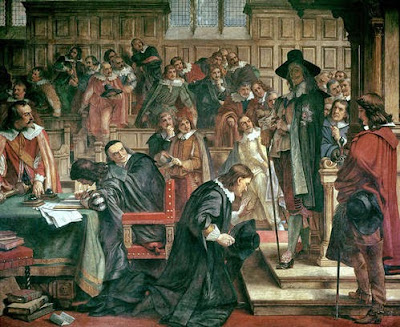 This was drafted in expectation of a hung Parliament and had nothing to do with the thoughts and hopes that the Prince of Wales conveyed to members of past governments, now to be published, honest guv', swear on my Burke's Peerage.

If the new House of Commons proves as unsatisfactory as it might be and in consequence we have a government that is disorganised and seems at serious odds with the needs of the nation, perhaps Prince Charles may invoke historical precedent.

Gathering a few loyal retainers together he could march into the House, turf the Commons out and establish the absolute rule of the monarchy.  Should he add to this sequestering the assets of the leading financiers in the City along with other measures to assert his authority over taxes, spending and the economy it will bring much needed change.

It is likely he might face some London centric opposition from members of this displaced ruling group.  If so, I would suggest retiring to a part of real England, say Nottingham, raising his standard and calling all loyal subjects to support him and assist in his taking over control.

In view of the happy event this might well be their marching song.

It could still happen, I await my phone call to the colours.