At Her Majesty's Pleasure? 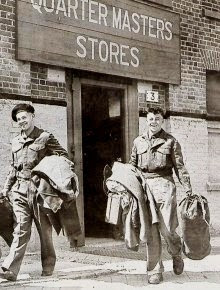 Prince Harry, who is reported to have called for bringing back "National Service", is one of The Royals in more ways than one.  The important one is that his regiment is The Blues and Royals created in 1969 by merging The Blues of the Household Brigade with The Royal Dragoons (not to be confused with the Royal Dragoon Guards).

The Royal Dragoons was a regiment I was acquainted with and once played cricket against them.  We won, partly because their best batsman, their Adjutant, had to retire injured when caught where it hurt by a vicious in-swinger.

In those days upper class chaps often did not wear "boxes" to protect their genitals relying on the sporting instincts of opponents.  Sadly the bowler in question suffered a deficit in that instinct having learned the game in local leagues playing on public parks where bets were involved as well as other rivalries.

I name no names.  Before anyone thinks about National Service now it might be useful to look back at what it was.  As you now have to be 70 or more to have done it in the mid 20th Century it might be worth realising at what the intakes were like then in comparison with the youth of today.

You became liable for National Service at 18, but it might be deferred if you went for some forms of higher education or were in an apprenticeship in various trades etc.  For some it was an awkward choice.  Did you get it over first or wait until later, but then have a two year hiatus in career and life?

Most men went in at 18.  As the school leaving age was then the end of the term in which you became 15, typically the great majority had worked in ordinary jobs.  In the grammar schools then, many left at 16, again to take up jobs and a minority went into the sixth forms.

In short the majority of recruits had already had the discipline and experience of real work and usually for longer hours than today in highly structured workplaces.  Moreover, among that majority were very many in fact who had not been to a secondary school at all, but had attended all age Elementary Schools.

So National Service in general was not the first experience of strict discipline in their lives.  School discipline was a lot more physical and fiercer and for the majority who had been in work they had been obliged to knuckle down to do what they were told to do.  Broadly this was a world away from present conditions.  The Armed Services simply carried the discipline etc. thing further.

A more difficult area is the mind world of that period.  We need to very wary of what is usually suggested as the norm on the basis of some of the legacy media from that period.  All teenagers were not rock and rollers, in fact many regarded those that were as prats suckered by crap films and other noisy Hollywood stuff.

What was common at the time among all classes was the business of ballroom dancing, for most a necessary social skill.  Many took lessons others learned from friends etc.  On TV now it may look very old fashioned but that in turn had its disciplines.

Despite all this, many National Servicemen did not get on with the services, counting the days, learning how to avoid work, turning bolshie and become more questioning of authority.  One skilled worker friend of mine did his time working in a stores, picture above, and regarded it as a gross waste of time.

But experiences did vary.  There was education provided in the services which helped many.  Some had interesting and worthwhile work or opportunities.  Some did not, spending their time on routine work of limited scope.  Some, including men who saw active service came out damaged in one way or another.  It was a lottery.

National Service brought them into contact with the upper class in the shape of some of the officers and often they did not like what they saw.  But there was worse to come.  When National Service ended and major reductions occurred in the services it impacted greatly on the officer classes.

The public schools that had sent so many into Empire and the services for decades found that their alumni had to look for other kinds of work.  One effect therefore was to redirect hordes of public school men into management and supervision in the public and private sector, very often into "personnel" and such.

There the subordinates were often former National Servicemen whose experience had the effect with many of causing them to distrust, dislike and often oppose the implications of the class system and to suspect the motives and attitudes of those at the top notably the managerial classes as they were then.

This may have been an underlying element in much of the industrial and other strife that became so common in the 1960's and 1970's.  Also, there may have been other effects arising from disenchanted young males.

It wasn't rock and roll and the media that created the freedom culture of later, for my money it was a male population who had mostly done time in the services and came out with a very different perspective on life, work and society.

Quite how modern 18 year olds in this very different world might react  I do not know.  It can only be a wild guess, but I cannot think that periods of forced military service would improve matters.

If Prince Harry were to play cricket against a bolshie conscript I would advise him to wear a well fitted box.
Posted by Demetrius at 17:40