Eating Your Cake And Liking It 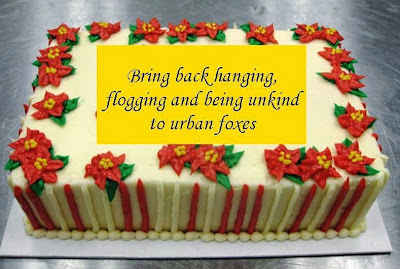 The story about the strict Presbyterian cake makers in Northern Ireland who felt unable to refer to gay marriage in the wording on a cake they were asked to bake has led to some comment.

It is being pointed out that this has wider implications, notably that there is a very wide range of differing opinions that could now be inscribed on cakes whether or not the cake makers or anybody else likes them.

The one above is given as an example.  But there are people I know who would enjoy a slice.  With the Irish Referendum on gay marriage imminent in the event of a "Yes" there are rumours that Channel Four will be running a "Father Ted" special.

Perhaps Father Ted will get to tie the knot at last with Father Jack in a ceremony conducted by the recently ordained Mrs. Doyle who has been tipped to succeed Bishop Brennan in the local See, who has left to open a cake shop.