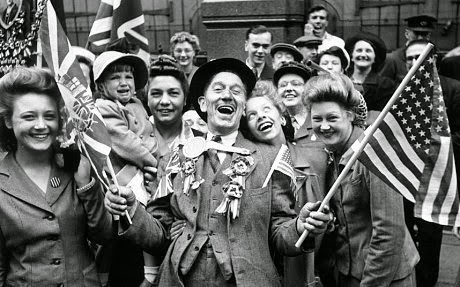 In the marking of seventy years since VE day there is a lot of material derived from the propaganda at the time of joyous fun, unfettered celebration and the rest.  This is not at all how I recall it.

Firstly, there was still Japan fighting and with the bitter and vicious war in the East still apparently with a long time to go.  It might be years before it ended and we had family in the services out there.  Secondly, my mother had lost two brothers in the past eighteen months and VE day was a time for sad reflection on what it had cost her family.

For my parents and grandparents generations there had been ten years of war in the past forty and other upheavals as well.  There was little optimism and a lot of fear of what might emerge from the chaos in the years to come. There were still family out there in the services and if the experience of the First War applied might not be out for some time because of troubles in The Empire.

They were also dog tired, working weeks of up to 70 hours for years with few breaks or real holidays.  Travel was very expensive and trains slow, badly crowded and unpredictable.  For ordinary life everything was a struggle.  In bitter winters there were fuel shortages and nothing could taken for granted.

We were grateful that we had finished with the sirens and a few other things.  We were not grateful that the long hours, shortages and that many uncertainties might go on forever and that even basics cost so much and were so difficult to find. There was no credit and the cash had to be there for the rent man and the shillings for the meters.

It was not until August and the formal ending of the war against Japan at the beginning of September that we knew it was finished.  My father, who was not religious, thanked God for the atom bombs and wished a few others could have been used and much earlier.  Even then we were aware that life had changed and that the coming years were going to be far from easy.

There may have been celebrations but the hangovers lasted until the 1950's.