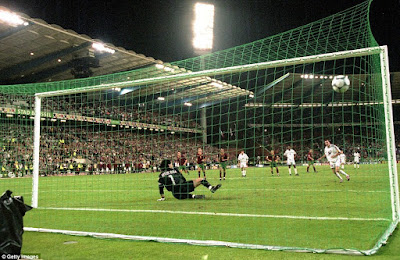 Today is the 30th anniversary of the disaster at the Heysel Stadium in Brussels, which has drawn some reports but little comment.  Let us remember them.

It is only a month off fifteen years since we were there on that terrace to see the France v Portugal Euro Semi-Final on free tickets via a competition.

Close to the end of extra time, France were awarded a penalty and scored the winner.  There was a strong reaction.  It was thought by the crowd that the penalty had been given because the Portuguese goalie had fouled Henry of France and by many of both teams.  We were not far behind that goal and thought so too.

It was only on the way back in the coach that we were told it was because after Henry had been frustrated, the ball went out to Wilford who had a shot on goal which just clipped the hand of a defender to hit the side netting.  It was spotted by the Assistant Referee on the line, not deliberate but a foul and so a penalty kick.

So what we were convinced had happened, it did not and in fact was something difficult to see by anyone on the pitch, including Wilford, all the players, the actual referee and everyone in the crowd.

It was the TV that showed it here on screen with the row that followed.

So what you "see" may not be what you think it is.  At the moment there is the row about FIFA and football and allegedly strange dealings over the hosting of the next two World Cups.  Politics is intervening in these matters and others.

The name Goldman Sachs has come up.  There is also the disquiet about Greece and what the money situation might be.  Again the name of Goldman Sachs is there.

In the latter case there is the bitter of issue of just what Greek GDP, gross domestic product, has been and will be.  The story is that the figures of the past were fiddled, or manipulated if you like, to tell a better tale than was true to get the money needed.

So a new team of statisticians has been brought in to sort this out only to be hounded because what they see as more true and reliable is very inconvenient.

Also, up in the Baltic, there is Latvia.  Despite it riding the storm to a better degree than others it could be better but it is claimed its figures on productivity are relatively good.  However in the footnotes it mentions that there has been substantial net emigration of unemployed low waged males which has helped.

Back in the UK our government is criticised because whereas productivity ought to be ever improving it is not and seems flat.  I have considered going into town to consult some of the large number of Latvians we have now, but they are very busy in largely manual and construction work.

They are hard working and efficient but the buildings going up are by traditional methods.  On the other hand a lot of existing buildings are up to let or for reconstruction as flats because the supposed hi-tech jobs have gone.  Also, my Baltic friends, we share some DNA, are big in hand car washing.

In ancient times, the mid 20th Century, I used to wash my own car, which did not figure in the GDP.  Then came the technological miracle of auto car washes, which did.

At first because of the workmanship of British car making, using one meant getting a shower inside the car as well, but this was corrected by buying foreign cars as did many other people.

Now however, rather than be banged about in a shaking car and worried about the wipers and bodywork there is the pleasure of high standard valeting done by a large team of men aided by a lady Valkyrie.  Who cares, I ask, looking at the shining results, about perishing productivity?

There is another bonus about having my Baltic distant cousins around.  Since they arrived we no longer troubled by groups of youths at weekends and such.

Also, when a posse of Roma with caravans turned up on a car park nearby, they were very soon gone without our constabulary being troubled although those with sensitivities on the subject of diversity may wonder.

Again, none of this appears in either the GDP or productivity figures.  As I look around the economy, it is clear that there are now and a lot more than before, many areas where the old ways of calculating and defining are inadequate and misleading.  So we are trying to run things on deficient data.

This allows the likes of rogue banks and other financial entities with major influence to more or less dictate what the figures ought to look like rather than any reference to reality.  In short they are gaming the figures.

Also, it means governments, notably our own scoring so many own goals.
Posted by Demetrius at 17:47