On The Right Or Wrong Lines? 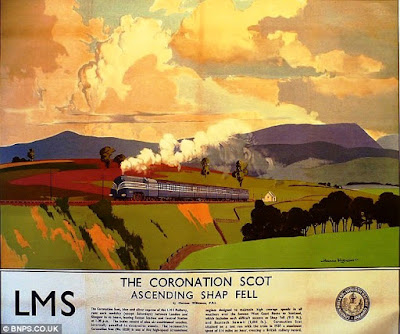 The MSN home page had an item about Bill Gates of Microsoft making 15 predictions in 1999 that seemed so strange and futuristic he was regarded as either a fantasist or seriously over hyping his company's potential.

His starting point was technical items and their implications and he turns out to have been all too right.  It is with us and is the here and now, that is if you buy the products.  Very many have and it is not just another variety of consumer product; it has and continues to change many lives.

They are here if you are really interested, but this post is about the railways, now close to being two centuries old rather than a handful of decades.  The two subjects seem far apart not just in age but in function and effect.  But it is arguable that George Stephenson was the Bill Gates of his time.

How steam and later oil and other power changed not just function but the world and societies is an old story, much of which is little appreciated especially in crucial detail.  One feature is that people of the time and even when and after the changes happened did not realise what was now the new reality and its implications.

In the UK, the belief that new HST trains will be the transforming agent for urban areas and can shape the future assumes that time spent in travel is non-effective and a cost and also that the scale of day to day movement that has occurred in recent decades is economically beneficial.

By this I do not mean matters arising from  human migration but the day to day doing the business, dealing with management matters, contact and immediate communication that are necessary to the processing of tasks and discussion etc.

This is no longer the case.  What might have seemed necessary and even compulsory in the past is now optional.  The travel now in very many is not essential to that but takes place for other reasons, be they social, consumption (shopping) or entertainment.

In that case the pricing and estimating economic benefit from building new lines in terms of strictly business and direct economic management is now pointless.  Additionally, a lot of this travel is now public sector activity, an area notoriously slow in advancing technology or organisation.

So the "business" case rests on public sector use, methods and work that is both seriously out dated and at worst wasteful in many ways.

Does anyone seriously think that building a new line to Birmingham, which already has two good lines or Manchester is going to generate a revival of manufacturing or labour intensive industry there?

Or does it mean in effect public money subsidised stoking up some property markets and expanding an already over heated financial services sector, which in any case is hell bound on jobs reduction with all the new technology?

The odd hour or two, or few minutes in some cases is not lost to work, because now you can work anywhere there is wi-fi and phone connections.  You can transfer documents and papers, discuss them in detail face to face, come to arrangements, make orders, arrange for orders to be delivered etc. etc.

The numbers of people chasing about or even going to workplaces for a whole variety of tasks is no longer needed and may well diminish rapidly as soon as firms and people have caught up with what is available in 2015 as opposed to 2010 or 2005 or 2000, or in my case 1955.

Even at top levels with diminishing numbers in top layers, the elimination of middling layers and also reduced numbers and with many of the ordinary levels of functionaries operating on technical gear, who needs to waste quality time catching trains?

Building railways has always been a costly and risky activity.  In the 20th Century because of the politics it has become common for railways, one way or another, to be dependent on State or local government support.

Many of the fabled new railways will never ever cover the capital cost, or interest on debt; and the debts are very large.  In a few cases, some by creative accounting they may be shown to cover immediate revenue costs.

There is another price to be paid that is little mentioned.  Down in the South East, the HS1 cost us 30% of our local service and shorter trains at all hours to cut costs on existing lines, with the expected consequences.  So now there is constant fiddling with timings and vague promises about putting more carriages on.

If the Scot's MP's want an HST line and are furious that the UK does not want to spend two or three hundred billion on a vast money drain to save the SNP politicians and their related Quango and public sector elements an hour or two between Westminster and then Glasgow or vice versa this may have a price.

That is either the existing West Coast or the East Coast service, or maybe both will not get the improvements that might be made and will be run down to slower stopping services with shorter trains, as has been the case in the South East.  Or the West might stop at Preston with a local service to Carlisle or perhaps the East at Newcastle with stopping services up to the Border.

Because if a range of improvements can be made to either or both existing lines and new longer trains with good services put on it would be a whole lot cheaper to do and maintain and be progressive in many ways.  The difference between the timing of present rail and potential HST could be radically reduced.

One consideration is that it would be a lot cheaper for the ordinary people, the lower paid and not the preserve of the far wealthier or expense account funded sectors of the economy and their friends in the property and major contracting companies.
Posted by Demetrius at 13:21