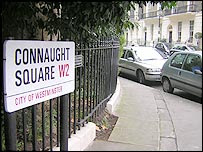 If there is a serious search on for Colonel Muammar Gaddafi why don’t they look in the obvious place? In a particular quiet, sometimes not so quiet, London square resides an old friend of the Colonel who is deeply in his debt, possibly, both monetary and personal.

Where better to hole up for a while? It is only a short distance from the Royal Albert Hall so perhaps he will be able to take in The Last Night Of The Proms in one of the better boxes. He could dress up like some of those in the Arena and be impossible to spot.

Not only will he be amongst friends but there are many oligarchs in the area who would welcome him as an invaluable source of advice on tax avoidance and use of sovereign funds.

His friend’s wife is a renowned legal expert on Human Rights. All he needs to do is find a pliant young lady with a nice cat and then plead that he is in a relationship that is intended to be permanent. That is, until the next young lady comes along, perhaps with more cats.

As for Megrahi, it might be best to leave him alone. If he does have what we think he has it is handling very damaged goods. Better he shuffles off the mortal coil in the bosom of his family than under guard in a UK hospital from dehydration or starvation. If anything were to go wrong it would be another PR disaster in the Arab world.

There are plenty of medical things to consider as well with this complaint and they can happen suddenly. One or two of them are highly dangerous, difficult to predict and sometimes to determine after death with certainty.

As someone who was probably under the flight path of the Pan Am airliner that went down in Lockerbie around 30 to 40 minutes before it exploded I would like nothing better to see anyone involved facing full life. But taking risks with Megrahi could have a lot of unintended consequences.

Back in the 1950’s I spent a few weeks in a bed sit in Connaught Square but moved on. It cost £4 a week and there were cheaper ones available in better areas. At that time the square had too many crooks and whores in residence for my liking.