The Illusions Of Money 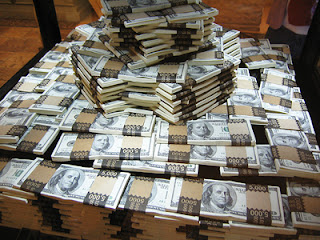 You can’t take it with you and you do not have it before you arrive. So money and for that matter wealth is only to do with whatever is the present. At one time it consisted essentially of rare metals or earth substances such as precious stones.

Sometimes other things served; rare spices, tulip bulbs and goods in scarce supply which could be easily exchanged for other things. These preferably would have long life. In my time cigarettes fulfilled this function with sugar and other foods also serving as other forms of exchange.

Basically, money is what people accept as money and wealth is what they can point to and say this is mine and I control it. There is scope for confusion here. At present we regard our living space as wealth when in the past it has often been regarded as consumption.

There are many learned men who have explained this and discussed all the history and the ramifications of these things. The trouble is that we do not learn from them and regard money and wealth as having some kind of reality when in fact it is an illusion only of our own lifetimes, as we are discovering yet again.

How those in the past have dealt with it has varied greatly. Attila the Hun and his followers were essentially a high consumption, acquisitive and low investment global activity with both a predatory and extractive system of management.

They forced others into debt and slavery and their extraction resulted in major public expenditure cuts notably in the Roman Empire. The scale of the damage they did was huge, yet they left very little trace of their empire, it became dust very quickly.

There had been other empires before and there have been other empires since. All of them in turn have had their illusions of money and wealth. Some have left more monuments, heritage and history behind than others and it is those with a written history which dominate our ideas.

We know that in the Atlantic Isles there was once a Henge culture that was extensive and must have involved high degrees of organisation, control and means of exchange and storing wealth. We know precious little about any of the belief systems, the economics, the people or their social structures. We can only guess from what we find in the ground.

However, there is a theory that when Margaret, Queen to King Malcolm Canmore came to Scotland from Hungary she was accompanied by a guard of horsemen. These became the founders; it is alleged, of the Drummond Clan. If so, then the Drummonds may well be descendants of the ancient Huns who rode with Attila.

In 1717, Drummonds Bank was founded which became part of the Royal Bank of Scotland group recently. The RBS financial strategy does bear some conceptual similarities with the activities of Attila and his followers. Now we have a major financial crash in which this bank has certainly played its part.

History casts a long shadow.
Posted by Demetrius at 17:30