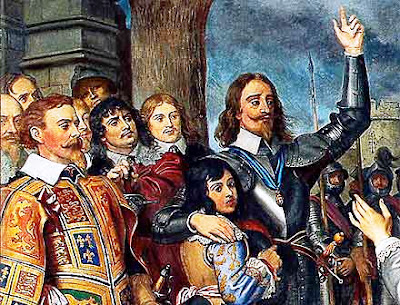 With Dave The Suave raising his standard at Nottingham, or rather Notting Hill and rallying all true men to his cause it is War against the rebels. Summoning not so much Prince Rupert but a Yankee Top Cop to his side we are in for Year Zero on the mean streets of Erdington and Enfield.

And who exactly is going to do the fighting? Will Boris lead his cavalry of Biking Boulevardiers into battle? The Royal Scots Greys, alas, are otherwise occupied, so there will be no Waterloo. Moreover if the gangs get out their guns it could just be a rerun of The Charge of the Light Brigade.

All he has is a large Corps of social counsellors and out reach consultants. These will be about as much use as a Mobile Laundry Unit and NAAFI canteen against the Soviet 3rd Shock Army now appearing as ravening hordes of predatory pubescent males and females.

To misquote someone, “We shall consult on the beaches, we shall discuss benefit rights in the night clubs, we shall engage with them in the fields and streets, we shall empower and enable them in the estates, we shall keep on giving and we shall always surrender.”

Yesterday, the Olympics lot ran a shortish bike race between The Mall and Box Hill in Surrey and back. In doing so, they paralysed all the traffic more or less in West London and much of Surrey. All the rebels have to do is nick a few mountain bikes from their local commuter station and ride around to bring London to a halt.

With apparently 66 countries using the US dollar as their marker and a further 17 in the Euro Zone with 7 pending as well as the Swiss Franc now becoming the default currency for anyone with serious money, any idea that the “markets” out there are “free”, whatever that means, is a serious misunderstanding.

There are going to be some serious dislocations around the world with a number of unresolved issues that are about to resolve themselves in unexpected ways. Also, in relation to the dollar at the moment the South Atlantic weather systems seem to be livening up. Something expensive could happen, hopefully not.

The chief worry for us all in the UK is that with the current scandal about Civil Service Gold Cards on the go all those that have them will cash in as soon as possible before something is done.

Not even George Osborne will be able to control that deficit. It could be that the Final Battle in the consumer outlets will be between the looters and the civil servants frantically trying to max out their departmental credit limits.

Time to start counting the spoons.