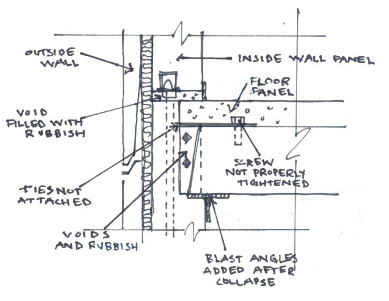 An acquaintance has recently down sized, or rather been down sized and moved into a town centre flat both for convenience and to eliminate many incidental costs. Bus and train fares don’t come cheap these days for those in the wrong age range.

At weekends despite being in a first floor flat in a substantial building the in the night for several hours the floor begins to shake. The building is a listed one and has solid floors and was built to take weight at all levels. Having relevant experience abroad he rates the level as Richter Scale 3 plus.

There can be no doubt that the tremors and their timing mean that their origins lie in the transmitted acoustic effects from the sound levels near but not next door by any means. Whether other loud sound locations close may add to either the level or complexity of the effect is possible but difficult to detect.

The physics and mathematics of the transmission of acoustic and seismic effects and their potential impact is highly complex. A major difficulty lies in the understanding of most people for these issues. A great deal does not seem to make sense. For example in an earthquake buildings thought to be much more vulnerable remain whereas those thought to be stronger either fail or collapse.

The peoples of the past put this down to the capricious nature of the gods. The reality is more complicated. One aspect of this is the history of the buildings and matters relating to the structures. By definition Listed Buildings have a history and often a long and complicated one. Recent and non listed buildings may still have a history but their structures are another matter.

The period of the 1960’s through to the 1980’s saw many buildings which had a lot of attention paid to design but poor build quality and short cuts in the relevant materials. In all buildings, but more so older ones deformation of the soils or below ground elements constitutes a risk.

Another area of physics that needs to be taken account of is Collapse Dynamics. That is the effect of phase transmission through solids and substances that can trigger unpredictable effects and where a weakening either exists or occurs will cause not so much limited damage or deformation but a widespread event.

In a structure the failure of one part, whether known to be important but only minor which then transmits failure can lead to a more catastrophic event.

In the UK in very many town centres are a variety of buildings of differing ages and condition, some listed, some not. The physics of acoustic and seismic events will take little account of the administrative classification. Strong effects will either weaken or act on already weakened structures irrespective of historical or any architectural interest.

If you have such a collection of buildings and regularly each weekend they are subject to seismic acoustic stress at up to Richter Scale 3 earthquake or beyond then risk will exist and probably increase the longer it goes on. Perhaps some form of risk analysis might be appropriate for the Listed Buildings around the country.

The next question is just what level of sound does it take to produce that Scale of impact over an area well beyond the curtilage of the building where it occurs? Clearly it will not be at a level currently deemed “safe” for employees, which is at 80 despite many hearing experts feeling that 70 would be better. Given that the decibel scale is a logarithmic one it is possible that to produce such a seismic effect could mean a level in the order of 100 plus with bursts of possibly more.

Clearly, there is a problem here. Business development in many town centres has meant a rapid increase in the night time entertainment and dance culture. Unluckily, a feature of this is high levels of loudness of sound driven by complicated and heavy duty equipment. In marketing there is almost a race to the loudest.

Whilst the concern has been mostly related to public order and health matters (are those flat out on the pavement simply drunk or suffering severe concussion?) there has been no recognition of the actual physical effects on the buildings around and their structural integrity.

I suspect that local Councils have little or no knowledge or awareness that there is a problem here or the liabilities arising. Sooner or later somewhere something will happen and nobody can predict where or what or which roof might fall in.

A small bet says it could be one of the Councils which invested in Icelandic banks.