The Deceptions Of The Duchess 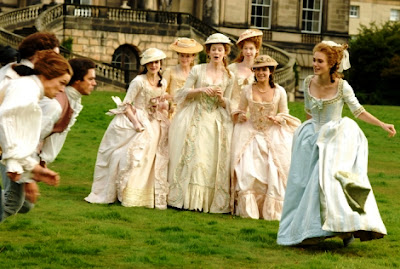 Being flooded out, not with a tropical storm but all the bad news on TV, we decided to put on a film that had been saved on the box. As so many films these days have lots of crash bang, split second cross cutting, flashing images and the rest we rarely get beyond the first five minutes.

“The Duchess” put out on BBC2 mercifully had little of this and was watchable both as a handsome production and with style. It was history, allegedly, about Georgina, Duchess of Devonshire, a major figure in politics, style and celebrity in the late 18th Century. This offered me the prospect of ninety minutes nit picking.

Within seconds of the start the first nit came into view in the shape of Charles Grey. Depicted as a virile young man with a smouldering passion for Georgina he took part in a race with other aristocrats to win the prize of a kiss. Alas, her mum had just called her back into the stately home to be betrothed to the Duke of Devonshire.

The trouble was that whilst Georgina was certainly a lovely 17 year old lass; the real Charles Grey would have been a ten year old. He may well have raced and been charmed by her but more as a sort of aunt or cousin. What would have more entertaining was if his race might have been as a draghound.

In past times it was not unknown amongst the aristocracy; the Mitford girls did it, was to use their children for the hounds to chase across country. It was thought to be invaluable in teaching them how a fox or stag might react in the hunt. For those who went into politics it was even more useful as a learning experience.

Eventually, Charles did get into bed with Georgina, but by then she was 34 and very likely given the times and the effect of drink and white lead makeup rather past her best. He was a 27 old rising young man with much to gain. The age difference would not be thought much of now but then it put him definitely in the toy boy class.

Eventually, he became Prime Minister and the man who brought in the Reform Bill and the Abolition of Slavery Act of 1833 so we have much to thank him for. The child he had by Georgina was given a decent upbringing and marriage settlement and in marriage he had a large family.

Another nit was Sheridan and the play “School for Scandal” implying that it had some sort of reference to the Devonshire family imbroglios. There were more than enough interesting marital situations around to provide the basis for that at the time and I doubt that Sheridan would have had a go at the Devonshire’s in 1777.

The real pity of the film was the absence of any sense of Georgina’s interest in poetry, art or the sciences. Admittedly, fitting in Thomas Beddoes (Wikipedia) to a fast moving film concerned with complicated personal lives would not have been easy and would have gone against its grain. But it would have raised some interesting questions.

Georgina died leaving huge debts arising from her high consumption, high living and gambling lifestyle. A great deal of “society” at that time despite their wealth and incomes depended on debt and eventually it all had to be paid for.

On the whole not much changes.