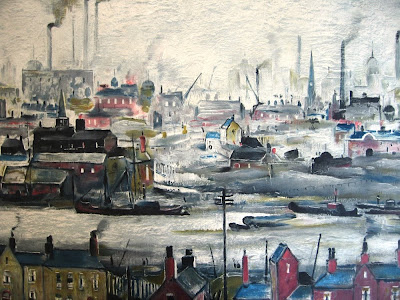 You need to be knocking on a bit to recall the winter of 1962-1963 and more to have much of a memory of 1946-1947. There is material online dealing with this and that, for the most part either personal or some of the worst events.

I was relatively lucky both times. No car to worry about and living within short walking distance of work, shops and other facilities, including rail stations at the time of steam. In those days along the line of supply at all stages there were stocks held and much of what we ate came from shorter distances.

In general economic terms, however, both of these winters came at bad times. The 1947 winter was a particular case. The UK was in serious economic trouble after World War Two. Because there was so little to consume and severe rationing was in place for many goods there was little to cut there. The War had run down public services so badly that there was not much left at the margins.

The consequence was a major setback to the economy, a political disaster for the Labour Party, coming just 18 months after an election where promises had been made. Because of the scale and nature of other problems of the period the impact of the severe weather on several margins of economic activity at the time has never been fully weighed up or judged against these other problems.

The 1962-1963 bad winter was different in scope. However, a Conservative Government that had won re-election by upping spending in 1959 was now in the situation of trying to control and correct rising inflation and major balance of trade issues, amongst other serious problems.

The economic impact of this winter was more severe in some ways. Notably, this was on consumption spending by now a much larger feature of the economy. But it hit badly on those parts of the economy where the government had tried to drive up activity.

In a world without credit cards and banks being obliged to operate strict credit controls the cost of the winter to the ordinary people had a large impact on overall spending. Food prices shot up and household fuel spending rocketed with an immediate impact on other spending.

If we do have a long cold and difficult winter it will not be easy to work out what would be the overall effect in 2010-2011. This is especially the case as so many government and other indices have been manipulated to tell other stories. If the evidence is thin for past winters it may be non-existent for this one.

It may be that all the pessimism about what the weather conditions are likely to be in the next month or two may be wrong. But bad winters can and do happen from time to time. In 1946-47 in some respects we were more ready and had the labour to deal with some of the worst. 1962-1963 was more troublesome in some ways but there was still enough flexibility and expertise to deal with many things.

This time round if it is a bad one at that kind of level it is possible that we no longer have the labour, the expertise or the facilities to deal with it properly. Cameron needs to have a key committee and other government emergency advisers looking at this one if he isn’t going to go the way of Attlee and Macmillan.