The Eye Of The Needle 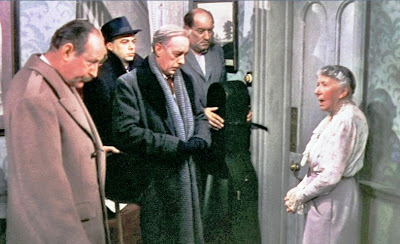 In the wonderful 1955 film “The Ladykillers”, see the picture above, set around Kings Cross the gang led by Professor Marcus tries to launder its stolen money through the use of Mrs. Wilberforce, a most respectable lady.

One of the themes is the thesis that the insurance companies won’t really mind, they will simply put up their premiums.

In this flight of fiction the gang ends up dead and Mrs. Wilberforce ends up rich. In our modern world it is not as simple as that.

The Tax Justice Network blog has an item on the subject of money laundering based around an interview of John Le Carre talking about his latest book “Our Kind Of Traitor”. This is featured on the link to Democracy Now dot org.

The interview lasts about an hour on the embedded video but the full text is given on that blog and can be read more quickly.

Here are a couple of extracts below for anyone interested.

Now, this isn’t fiction. That part of it isn’t fiction. Money laundering is simply everywhere. On the grand scale, it’s endemic to banking. You have to bear in mind that when Lehman Brothers wasn’t going to function anymore and the big banks weren’t lending to one another, back at that terrible time, $352 billion of illegal money were then tacitly released upon the market, and that was about the only money people were lending to one another.

So, money laundering is not some distant fantasy. It’s actually how you handle the profits of extortion, tax evasion, criminal conspiracy and huge quantities of drug money, how you get that into the white sector. And what we are gradually learning from these little exposés that come to light is that there is almost no way of denying people, in the end, the profits of their crime, which is a tragedy.

And it’s also a frightful annoyance, because we pay vast sums of money across the way here to agencies that are supposed to stop money laundering. It doesn’t happen.

Well, I think that my anger still stands. I can’t understand that Blair has an afterlife at all. It seems to me that any politician who takes his country to war under false pretenses has committed the ultimate sin. I think that a war in which we refuse to accept the body count of those that we kill is also a war of which we should be ashamed.

We’ve always got to be careful of that. I think that—I wasn’t speaking as a prophet, I was just speaking as an angry citizen, I suppose. I think it’s true that we’ve caused irreparable damage in the Middle East. I think we shall pay for it for a long time.

One of the problems, surely, is that victims never forget, and the winners do. And they forget very quickly.

If people knew basically, for example, what we had done in Iran when we ousted Mosaddeq through the CIA and the Secret Service here across the way and installed the Shah and trained his ghastly secret police force in all the black arts, the SAVAC, if people understood the extent to which we had humiliated Iran, then they would understand the later developments in Iran and Iran’s posture now.

If people would look at the map and see the extent to which Iran is encircled by nuclear powers, they wouldn’t take it perhaps quite so seriously that Iran is seeking to arm itself with—if it is—with nuclear weapons.

I remain terrified of the capacity of the media, the capacity of spin doctors, here and abroad, particularly the United States media, to perpetuate false lies, perpetuate lies. Mussolini, I think, defined fascism as the moment when you couldn’t put a cigarette paper between political and corporate power.

He assumed, when he offered that definition, that media power was already his. But I worry terribly that the absence of serious critical argument is going to produce a new kind of fanaticism, the new simplicities that are as dangerous as the ones which caused us to march against Iraq and as misunderstood.

So if London is one of the money laundering centres of the world then who has been and who is getting the benefit?