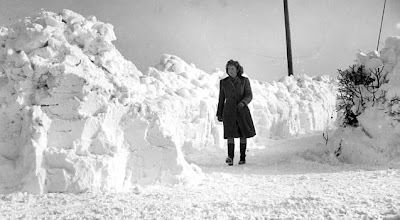 They deserve reading and some thought. In those days, however, there were far more men to hand to do the shovelling and distribution systems were not just-in-time but had substantial storage facilities as a necessary part of the business.

As the Minister for Fuel and Power, Emmanuel Shinwell found out, if you took the risk that the winter would be a mild one it would not simply be embarrassing, it could destroy the credibility of your party.

At the time when Shinwell was deciding not to press for increased coal production this article appeared in the Manchester Guardian when it was still based in that City. It is not about the United Kingdom, it is about Germany.

Postwar Germany: a place of horror

In the square in front of the station, a few lamps shed pale incandescence over the deserted pavements below, emphasising the desolation and dereliction. I floundered over pavement edges with the aid of a torch.

I would shy at the approach of a glowing cigarette-end. I knew, well enough, that human lips held the cigarette, that human feet propelled the wooden shoes.

But there are times when it is hard to believe what one knows; and in Oberhausen I could never be sure that I was not a dead man among the dead in a dead town.

The platform was just light enough for one to see that an enormous crowd of men, women, and children had congregated, with suitcases and portmanteaux and sacks.

They are "hamsterers", town-dwellers who go into the country to "scrounge" potatoes, fruit and vegetables. "Hamstern" means to hoard; but in Germany today it means to take the requisite action to keep body and soul together.

In Oberhausen (and probably elsewhere) secondary schools were closing on Saturdays in October so that the children might go and get potatoes wherever and however they could.

Rolf had not expected to see this crowd; he had brought me to see the returning "hamstering" train from the country districts between Hamm and Hanover. But this crowd, from the easy way they swung their suitcases, was obviously at the beginning of its journey.

Then a loudspeaker announced that the train from Hanover was already over a hundred minutes late.

Almost as he spoke the German voice, announced the night train from Cologne to Hanover was approaching.

The train drew in. Every compartment and every inch of corridor was already crammed, but this did not deter the people on the platform.

Within a few seconds men were already on the roof, on the buffers, between, the coaches, on the running-boards.

The occupants, if charitable, opened the windows. I saw women handing in their babies and husbands their wives, themselves following as best they could.

The Ruhr today, if you like facades, is a place where children play boisterously, in streets that are not unlike Stockport and Bolton, Rochdale and Oldham, if you discount the rubble.

But under it all is hunger and horror: in the hundred and one secret places of the Ruhr, thousands know that the coming winter will bring them little soup, less fuel, and no hope.

We need to remember that the Atlantic Isles occupy only a small part of the globe. So whether climate change is going one way or another or whether there are just shifts in existing patterns it could happen that we could be in for colder conditions for a while.