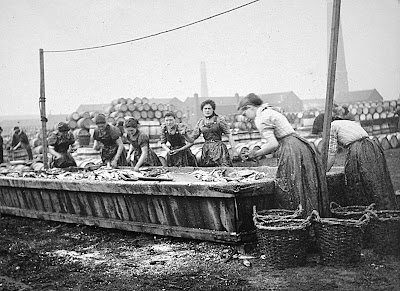 In looking at those resources that have peaked in production and will either decline in terms of actual totals or in relation to expanding demand there is this 576 word item on fish.

The issue is not new; there have been anxieties and action in recent years that have had a major effect on the UK fishing and allied industries. What the article does is to claim that the catch has now reached its limit.

What is annoying is instead of sticking to the issue of sustainability in terms of the rate of extraction the article mentions climate change. This is another matter and can confuse the debate on the actual fisheries policy.

If any other issues are mentioned they might be what is happening to fresh water fisheries and the increasing levels of contamination in those and in the oceans.

'No fish left behind' approach leaves Earth with nowhere left to fish:

The Earth has run out of room to expand fisheries, according to a new study led by University of British Columbia researchers that charts the systematic expansion of industrialized fisheries.

In collaboration with the National Geographic Society and published today in the online journal PLoS ONE, the study is the first to measure the spatial expansion of global fisheries.

It reveals that fisheries expanded at a rate of one million sq. kilometres per year from the 1950s to the end of the 1970s. The rate of expansion more than tripled in the 1980s and early 1990s – to roughly the size of Brazil's Amazon rain forest every year.

Between 1950 and 2005, the spatial expansion of fisheries started from the coastal waters off the North Atlantic and Northwest Pacific, reached into the high seas and southward into the Southern Hemisphere at a rate of almost one degree latitude per year.

"The decline of spatial expansion since the mid-1990s is not a reflection of successful conservation efforts but rather an indication that we've simply run out of room to expand fisheries," says Wilf Swartz, a PhD student at UBC Fisheries Centre and lead author of the study.

Meanwhile, less than 0.1 per cent of the world's oceans are designated as marine reserves that are closed to fishing.

"If people in Japan, Europe, and North America find themselves wondering how the markets are still filled with seafood, it's in part because spatial expansion and trade makes up for overfishing and 'fishing down the food chain' in local waters," says Swartz.

"While many people still view fisheries as a romantic, localized activity pursued by rugged individuals, the reality is that for decades now, numerous fisheries are corporate operations that take a mostly no-fish-left-behind approach to our oceans until there's nowhere left to go," says Daniel Pauly, co-author and principal investigator of the Sea Around Us Project at UBC Fisheries Centre.

The researchers used a newly created measurement for the ecological footprint of fisheries that allows them to determine the combined impact of all marine fisheries and their rate of expansion.

Known as SeafoodPrint, it quantifies the amount of "primary production", the microscopic organisms and plants at the bottom of the marine food chain, required to produce any given amount of fish.

"This method allows us to truly gauge the impact of catching all types of fish, from large predators such as bluefin tuna to small fish such as sardines and anchovies," says Pauly.

"Because not all fish are created equal and neither is their impact on the sustainability of our ocean."

"The era of great expansion has come to an end, and maintaining the current supply of wild fish sustainably is not possible," says co-author and National Geographic Ocean Fellow Enric Sala.

"The sooner we come to grips with it, similar to how society has recognized the effects of climate change, the sooner we can stop the downward spiral by creating stricter fisheries regulations and more marine reserves."

All the familiar human weaknesses are displayed here and we have started to pay the price already. By price I mean price because we have seen the substantial rise in cost of our routine fish buying, that has more than doubled recently.
Posted by Demetrius at 13:00