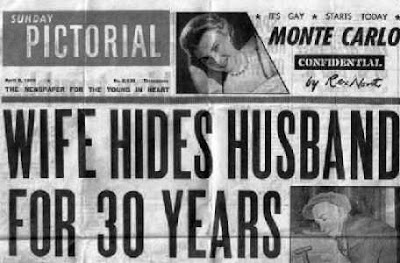 You know that you are old when……..


The “Help The Aged” charity collectors on the street no longer ask you for contributions.

No one wants to sell you insurance policies.

Someone ignores you but tells your spouse that their parent is looking quite well for their age.

Junk mail is something that keeps you in touch with things.

Every morning your head feels terrible despite being sober or not the night before.

You ask a Chelsea supporter if Madonna had a good game; and then you tell him why the team of 1955 were a great deal better than the present one, just to cheer him up.

All the day’s programmes on the History and Biography channels deal with subjects within your living memory.

None of the plots in any of the “soaps” is new to you.

Recalling what a nuisance STD was to you in the past you forget to say that you are referring to the pre-digital telephone Subscriber Trunk Dialling system.

The nights always seem to be getting longer, and so do the days.

The quart of ale that took a short time to drink and a long time to lose now works to an inverse ratio.

Shoelaces are a bad idea.

The hours parking charge you have just paid is more than your first week’s wages.

Before you get anywhere, your feet start to hurt.

Telling young people how eccentric, unpredictable, and difficult your parents were, they begin to look at each other.

At the restaurant you ask for a starter of bread and dripping.

Securing the senior citizen concessions is more important than your pride.

Your grandparents turned out to be right.

Going to bed each night you feel tired, stiff, and aching, but when you get up it is even worse.

Reading a glossy magazine you think that the Rolling Stones look older than you do.

You are unwilling to admit you never used a computer during your working life.

At a concert the programme notes tell you that all the composers listed lived much shorter lives than you have.

Your relations stop asking when you are going to grow up.

The girl of your dreams is no longer a beautiful barmaid but a nurse who knows how to insert a catheter properly.

Heaving cases around is too much trouble so you don’t bother to go away.

At the health shop you ask for some orgiastic chocolate.

On telling people that you did National Service they think you were convicted for anti-social behaviour, and you enjoy their apologies when you explain that it meant serving your country.

You never tell people that you were court-martialled for gross insubordination, going absent without leave, missing parades, drunk and disorderly conduct, improper use of a main battle tank and other military equipment, and goosing the Colonel’s wife.

Your spouse prefers to talk about TV archaeology programmes when you move closer in bed.

At a large wedding reception you are the only one there who saw Tommy Lawton head a goal.

You are spending longer at the doctors and hospital clinics than down at the pub.

Your IQ is declining faster than your bank balance.

It makes you laugh to recall how proud you were of your teenage outfit of oxblood leather brogue shoes, chocolate brown twill trousers, green Harris Tweed jacket, white starched collar shirt, striped old school tie, and woolly tartan scarf. Then they remind you that your style is unchanged.

Poetry has some meaning.

Some of the people keeping warm and dry at the library have gone straight from college into early retirement.

At 3 a.m. when your spouse finds you watching TV it really is a cartoon channel.

You kick stones along the pavement again.

If nobody is watching you see from how far you can hit a lamp post with a gob of spit.

Telling youngsters that Frankie Laine and Guy Mitchell were much better than the Beatles, they ask who the Beatles were.

In a City of London pub you are the oldest in the bar by forty years.

Someone offers you a seat on a Tube train.

When you look in the mirror you see the uncle who was never invited to family parties, but always turned up to teach the kids how to cheat at cards and dice.

Your young relations often forget to ask you to family occasions, and complain when you teach their kids the computer hacking, martial arts, and graffiti tagging skills they need nowadays.

Waking up in the morning you cannot work out if it is tomorrow or yesterday.

The people presenting the funeral plan advert’s on TV look too young for the job.

You still wear the top part of your pyjamas, and at mid-day you are still wearing them.

You have to keep your own medical records because your NHS ones have been deleted by their computer’s automatic archive control function on the grounds that you are deceased.

People laugh when you assure them that loose-leaf tea makes a better brew than tea bags.

You finally go on a coach holiday having avoided them because of all those old people and find you are the oldest on the coach.

No friends of your childhood or youth respond to your details on Internet contact sites.

The bad knee changes legs from day to day.

At a Wake the deceased looks in better health than you do.

At the Museum the 1930-1950 Display showing the poor living conditions of the lower income groups reminds you of families much better off than yours at the time.

You have conversations with automatic telephone answering systems.

The name of the scorers in tonight’s crucial game escape you but you recall every detail of the first TV Cup Final of 1950 when serious errors of judgement by the linesmen and outrageous refereeing decisions robbed Liverpool of the game against Arsenal.

At the gym the staff check out the resuscitation equipment when you sign in.

On motorways other drivers begin to overtake you.

Pensioners staggering across pedestrian crossings cause you to brake instead of accelerate.

Reading books on Modern History tells you that you got it all totally wrong, and so did every one else of your generation. The information is used to prove you were always right.

Hot weather keeps you at home, and so does cold weather.

All the events mentioned in obituaries are very familiar.

Train timetables reveal their inner meaning, but you cannot remember the times of the trains.

You wear jeans hoping that people will think you are only in your sixties.

At a christening you assume, wrongly, that the happy parents are married. Much worse, you assume that the man is the father.

You prefer the Departure Lounges at Heathrow to attending any kind of meeting.

Either ticking the box for your age group always means going to the bottom of the list or the drop down for your year of birth on the web site does not go back long enough.

None of your old clothes fit, and the shops do not stock any that do.

Dentists start smiling when they look in your mouth.

Doctors stop smiling when you enter their surgery.

You keep sitting on your glasses.

The joke that went down so badly at a party was one you first heard behind the bike sheds when you were fourteen, and you still think it is funny.

The sound is either too loud or not quite loud enough.

At a gathering you make it clear to everyone in the room individually and several times that you cannot stand old people who talk too much.

Everything takes three times longer than it should do.

You can’t remember what you have forgotten.
Posted by Demetrius at 17:57