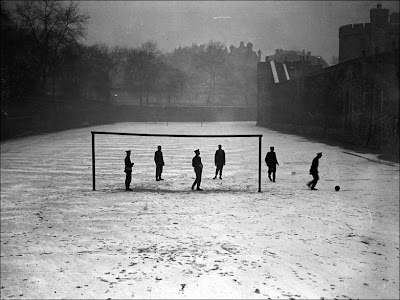 Am I mad, or just ordinarily deranged? I am looking out of my window at a main road that is now free of traffic. A couple of furlongs away is a railway line that is now silent. The local airports are all shut. The motorway up the road is blocked. The ports to which they go are severely disrupted.

This is not local, it is now happening across much of the UK as communications, communities, public services and ordinary work struggle to maintain any real activity. There is a real crisis here waiting to happen.

What is BBC and Sky telling me? There is a meeting in Zurich to fix the dates and locations for some football matches to be played in 2018 and 2022. In the news this has absolute priority and we are told what interest Spain and Portugal might have and who has spoken to who and which person has made promises to others.

The BBC is taxpayer funded. Why has it not used all its resources to maintain a rolling service of information and advice to the UK concerning the conditions across the country about what is happening where and what people need to know and think about?

It is simply not good enough to tell people to go to the web because what is there is not co-ordinated or full enough to do the job.

So what exactly is this meeting? It is being held in Zurich. See my “Racking And Rolling The Swiss” of Thursday 9 July 2009. It is a major tax haven within a tax haven. Many of the most vicious thieving elites of the world have transmitted their loot through here and adjacent Cantons.

Also it is where football’s governing body FIFA is located, made up of a number of self appointed people from…..say no more.

Where is our Prime Minister, David Cameron? Is he in London or Edinburgh or Cardiff or Belfast overseeing the efforts and direction of dealing with the present weather crisis and other crucial financial issues?

He is not, after a fleeting visit for Questions in the House of Commons he has returned to Zurich, not just to check out one of the family Trusts, but to butter up and grovel to the financial elite running FIFA to beg them to stage their football matches in England.

Where is Prince William? Is he out with the over stretched and vital Air Rescue Services we are told he is a key member of? Nope, he too is in Zurich and not just checking out some of the lesser known family bank accounts. He is doing even more grovelling and schmoozing than Cameron around these greasy grotesques.

Add to them the mob of other people, virtually all with serious financial interests in the matter and the well equipped brigade of BBC people, better equipped alas than any of our troops serving abroad and England certainly does expect some return for its money.

And, dear taxpayer, it is you and I who are paying for all this, as we are for the costs of the present weather situation. Also, if the games are allocated to England then we will be paying yet again. None of those doing the talking in Zurich will pay.

None of all the money launderers and other big money people running our Premiership will be paying. None of those very rich people or corporate representatives or politicians yelling Prestige and Economic Growth at us will be paying either.

I repeat, you will pay and the snow is still coming down.
Posted by Demetrius at 10:09