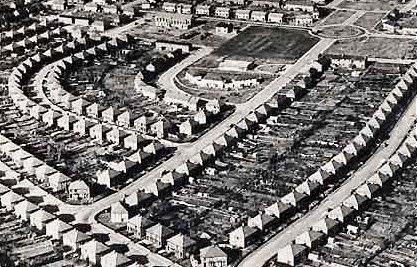 Walking around local streets built something over a hundred years ago was an exercise not just of the legs but the history of property.  The houses were terraced and packed in close to put as many per acre as was compatible with the times.

But they were then sold as leasehold with the local estate owner taking ground rents at say five pounds a year.  So a street of a hundred houses would yield an income of five hundred a year guaranteed, a goodly sum.  The freehold was retained by the estate so when the leases expired they could determine what happened next.

Then Lloyd George and the Liberals came along upping taxes and introducing inheritance tax.  As for the houses many leases were bought by people who put their savings into property and rented them out.  But after the First World War and a housing shortage the idea of Rent Controls took hold.

This had relatively limited effect until the 1940's when penal taxes were imposed on "unearned incomes".  At the same time the gradual and then more rapid inflation of prices was ahead of rent increases allowed under the controls.  Also estates came under a variety of pressures.

So by the 1950's changes arose.  The estate owners sold off their freeholds, no long worth much because of taxation and many of the them being under financial pressure.  Those who were renting out faced demands for major improvement costs to put in electricity, hot and cold water and bathrooms etc.

The result was that many of them sold the properties for what they could get and the freeholds often went with them.  By this stage in any event it was increasingly common for builders to sell new houses freehold both for marketing and profit.

After the Second World War there was again a serious housing shortage and the State had to intervene to allow local authorities to expand the building programmes they had been providing since the 1920's and housing was a major election issue.

There was relatively little private investment in new rental housing because of the effect of rent controls and the demand for better equipped and more spacious housing promoted again by the state.  Ordinary savings went elsewhere and it was a sector that people with disposable wealth were advised to shun.

It came to be assumed that only the state and local authorities could build and manage social housing and it was central to much of the business of local and central politics with all the disadvantages of this, notably corruption and malpractice.

To add to this the recent history of property law is a very complicated area and there has been no shortage of change or legislation, both in 1993 and 2002.  It is not just the weight of history that hangs heavy it is that of the recent burdens put upon the market.

Also what is going on does not match up with what is assumed.  Land Registry figures are quoted as reliable, but for some time there have been numbers of property transactions not registered.  Also, some that are registered may not be owned by whoever is named, particularly in many leasehold properties.

In the USA it is known what happened when the security for mortgages was taken and used in various ways as financial products for a variety of purposes. The situation in the UK is much less clear due to the bailing out of so many banks etc.

The need to keep the property market active and the prices rising may be driven by the potentially catastrophic potential of the consequences of securitisation of mortgage assets by major banks who may not know who now has title to the securities.

In leasehold developments the complexities have meant that who is supposed to be the freeholder is not the person who controls the money or has title.  These too may have been bundled and used as financial products in a chain of activity.  After the recent crash it is possible that many titles might have been lost.

The property market is not a simple whole, it is many sided with many margins and pressures and activity on those margins.  But these can interact.  For example in one minor part we are no longer exporting so many pensioners to foreign markets, in fact we are re-importing many of those from the past.  Add to that the imports of the elderly joining recently arrived incomers from extended families and you have a reversal in this sector.

There have been other significant shifts at other margins in the market with the effect that it has become tighter and more difficult both to understand and manage.  This is not going to work out well.  There are too many pressures on the too many pressure points at the same time.

Inevitably, there are calls for more state action.  This is all too likely to add to the burdens, costs and problems we already have.