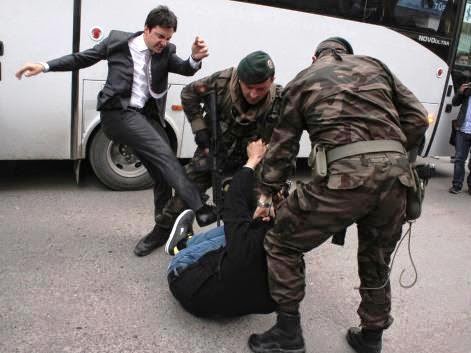 When you are in a hurry and skipping over material it is very easy to make a mistake or a wrong assumption.  From this other things may follow and down the line the mess might become difficult to disentangle.

The picture above was flicking across the screen, one of a series, and my immediate reaction was to wonder what Nick Clegg, our Deputy Prime Minister, was doing kicking someone who was being held down by a couple of Royal Marines.

That the clip said he was an adviser to the PM made me wonder for about three seconds but then assumed that the Deputy PM had been elevated to a more important and influential role in government.

Perhaps one that allowed him to clog either a dissident minister or member of Parliament, or at least a stray pleb' who had been riding his bicycle for laughs.  That he might be unlikely to do this should have been a reaction, but as Nick is a sensitive person given to instant emoting again I assumed it was he.

Luckily before doing anything or tweeting to the million or so followers on my zeusknowsall address to alert the nation it was cup of tea time.  Returning to the machine and slowed down when the picture came up it appeared that it was not Nick Clegg it was from Turkey and concerning reactions to the tragedy there.

The Coalition has now been in post for four years and is showing all the signs of wear and tear.  Cameron is looking tired and out of sorts and all the glitching and bitching now is not due to the run up to the immediate or later elections.  It is too many people who have been chasing their tails for too long.

There is no shortage of information on the web about the effects of lack or sleep, or of stress, or of tired people making hasty decisions or statements or pursuing wrong choices when they should not be.

Given the challenges that could arise in the next two or three years the idea that our leaders are not just ill equipped to deal with them or are working with faulty systems or poor data but may not have either the minds or the bodies to cope is worrying.

Equally, the modern demands of many of the jobs at crucial points in our organisations and services place, if not equal, but severe pressures in a lifestyle that denies decent rest and sleep.

We may all be going mad and more and more quickly.