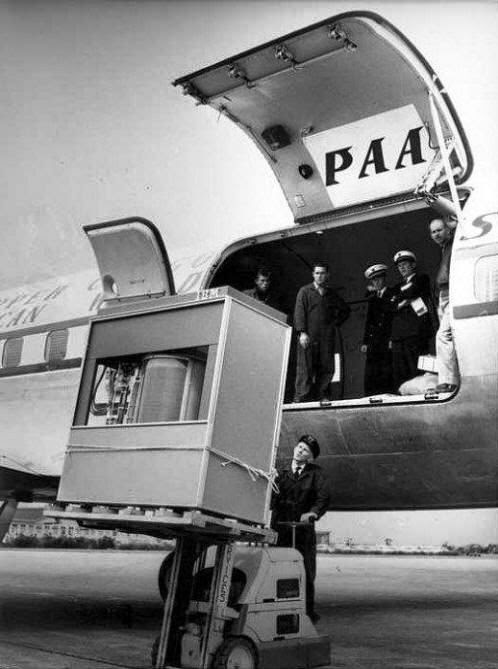 The picture above from 1956 shows a computer memory device being loaded onto an aircraft.  It is large, heavy, and very expensive.  It stored 5mb of memory.  In those days there were very few computers, they were little known, and managed by a mysterious cult of boffins.

Imagine, food cost a third of the ordinary family incomes, and supermarkets did not exist.  Manual adding machines and ball point pens represented heights of technology.  A fridge was a serious luxury item for the ordinary family.

A TV was a new experience where you watched what you were told to watch, and newspapers had real news.  Most people rented their homes, few could obtain much if any credit, and a car was still a distant ambition.

The dockyards were filled with men but the first real container shipping service began that year, although there had been a handful of specialist ships in the previous decade.  Across the UK were the workshops of industry and mines and railway facilities and farms employed many labourers.

The City of was a place where people knew what they were doing.  Now we are broke, yet again.  Perhaps it is time to reflect on just what might be in store for us in the next fifty years.

I can do so confident in the knowledge that the vast majority of the futurologists of 1956 to 1959 had it hopelessly wrong.  A more delicate issue and maybe an advantage is that I will be unlikely to be around unless something really remarkable happens to the expectation of life figures.

However, if I manage to get some things right then I might become an object of veneration, a new Nostradamus for the 21st Century.  The trouble arises immediately I begin.

A major challenge is the wealth of information, sources, and debate now the web has opened up the minds and thoughts of the world to any who cares to debate or inform.

Whilst properly this should lead to uncertainty and questioning, people have been brain washed into expecting positive and firm predictions, even when they know those who give them are lying through their teeth or have a personal agenda and something to sell.

However the figures probably will be manipulated, vital evidence be suppressed, and “research” done to order.  My personal problem is that if I set out predictions in which I honestly believe, using the LBO method of analysis (Law of the Bxyzabcg Obvious) some will be deeply uncomfortable, very difficult to accept, and will attract complaints.

At least amost all the advice and information nowadays there are online sites which advise you how to learn the basic skills of hunter gathering, but I am keeping this information to myself.

But I am old fashioned and still think that 5mb is a lot of memory to have.  Well, Bill Gates did once say that 256kb of memory was as much as any ordinary computer user needed, and who knew any better in those heady days of 1980?

What changes?  Almost everything?