Looking To The Future 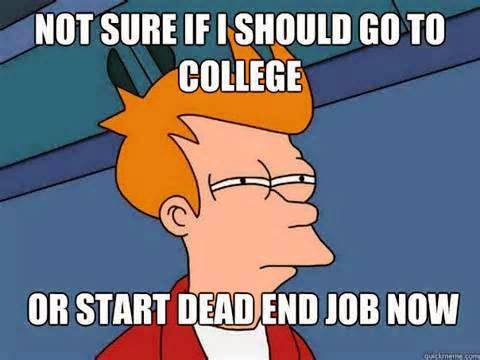 Had to give back word to the Bilderberg Group bash in Copenhagen this week.  It would have been a pleasant trip and amusing in its way.  Spending a few days with Great Persons all of whom are representatives of a past era would have been nostalgic but not very useful.

Historically, it would have been reminiscent of the aristocrats, grandees and magnates who gathered together at Versailles in the last years before The Revolution of 1789 swept them away.  They were convinced of their permanence and greatness and right to rule.  They were wrong.

Then like now the first signs are small ones, usually disregarded or not given much attention.  What follows are events, disruptions, unexpected movements and unintended consequences creating a mix of chaos and calamity.

One apparently small sign could be the return of the Dead End Job to be the major employment and economic future of the large majority of the population.

Just about old enough to remember this as a fact for most school leavers and to have known many people whose lives had been in such jobs and whose parents lives more so, this sends a shiver through the memory.

This item was triggered by a phone call and incidental to it was mention of job changes at work.  A feature of this was that his company had removed a whole swathe of management.  The basic workers were less affected and most of the big bosses stayed.  It was the ones in between that took the hit.

Allied to this has been a good many reports of restructuring and fundamental reorganisations in many types of activity and these are beginning to gather pace.  The reasons are complicated but not entirely financial, despite its critical role.

It has to do with what we consume or need, how we get it and how the relevant businesses are organised, controlled and in communication with each other.  And at the bottom, mostly the dead end jobs are the people who do the basic work.

The combination of globalisation, a variety of technologies with major economies of scale coupled with the huge increase in the power, capability, extent and artificial intelligence functions of computers etc. are causing a rapid transformation.

So all the easy and blithe assumptions and predictions made even less than a decade ago about work, employment, structures, managing and deciding are now being overtaken by a new world and not just of business but a lot else.

With it are going huge numbers of middle and higher range management jobs and those to which not just people have aspired, but major areas of higher education have been devoted to supplying with labour.

This is going to have some nasty consequences.  One is that you cannot have extensive free movement of labour and fluid markets for it with at the same time rigorous employment legislation and regulation.

Because you will be trying to protect past jobs and if you do not free up the new jobs will go somewhere else and that can be anywhere in the world open to unprotected dead end jobs and with the spare labour to do them.

And very few in any of our governments and especially in Europe and critically among people like the Bilderberg group have a clue about what is happening, why, or when or where it will hit.