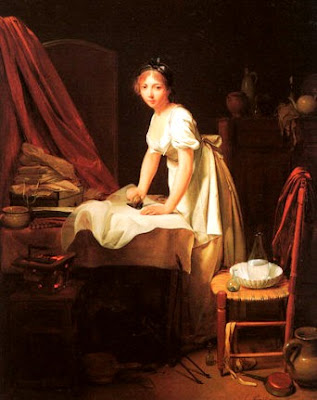 When looking for answers often you face more questions and they become harder to answer.  One in history is the "silent servants", who were the servants of certain people and what role did they play?

This comes to mind when Cassandra Austen decided shortly before her death in 1845 to destroy many of her late sister Jane's letters and other documents and to censor those remaining.  Who may have helped with the poker at the fire and perhaps busy with a pair of scissors?

For many years academics, Austen lovers and others interested have regretted this decision.  What has been lost can only be guessed at but it would have been of interest to a wide range of people.  The social or national history interest may have been limited, but there may have been items of value.

What is intriguing is that a young servant, one of the few of Cassandra's who might have helped, was Jane Tidman, born 1826 to Isaac Tidman and Mary Ann, born Andrews. She lived until 1919 and died at the age of 93.  Her mother, born around 1790 also lived long, until 1874, and had been in Chawton at the time of Jane Austen herself. What memories might they have had?

Jane Tidman married in 1848 to a William Garnett, in an ordinary way of life to do with horses and labouring.  William died in 1868 leaving Jane a widow for fifty odd years who got by as many did as a dressmaker.  There were six surviving children but there have been problems looking for descendants.  I suspect emigration which was common and from Hampshire the docks were not far away.

One intriguing question is what knowledge and talk there may have been about what was happening in Selborne a short distance away.  It could not be ignored, one of the famous works of the late 18th Century was "The Natural History And Antiquities Of Selborne" by the Rev. Gilbert White, who died in 1793.

It was a seminal work in its field and for a time Selborne was a famous place, the Austen's must have know about it and are likely to have read the book.  There was a difficulty, however, in that The Priory Farm there had been at the centre of White's studies but by the late 1790's and into the 1800's had the Fitt family as leaseholders.

They were of a robust outlook on life and manners. The surname Garnett has come to be associated with one of one of TV's most notorious fictional oafs and bigots, Alf Garnett of "Till Death Us Do Part".  Alf is a very bad fit with the politesse of Jane Austen. The Fitt's, however, could have run rings round the likes of Alf.

They sired a number of children out of wedlock. The circumstances were not unusual locally. In 1821/22 the Rev. J. Monkhouse wrote in the Parish Register of Bramshott, nearby, “Of 72 marriages in the last 10 years ending 1820, not less than 69 females have been unchaste before marriage. Those who gain husbands are more fortunate than those who bear bastards, but not more virtuous."

The records of Magdalen College show in the lease registers that Charles Fitt was in occupation on 6th August, 1795. It is possible that he followed a member of the Lassam family into the holding. In 1816 it was decided not to renew the lease after a legal opinion had been sought.  In 1817, however, the lease was renewed on condition he give the interest to his family.

In 1818 the lease registers confirm that in 1818 leases given to Benjamin and Frederick Fitt, Sons of Charles Fitt of Selborne, Yeoman. Leases were drawn up, also, in 1824 and 1832 for John Dunn of Alresford, as mortgagee, subject to a proviso of redemption by the Fitt’s. Orders were made in 1825, 1833, and 1834 related to arrears and interest owing, but in July 1834 an entry fine was accepted. Charles died aged 83 in Selborne, and was buried on the 11th May, 1843.

From the works of Jane, it might be assumed that the rural areas of Hampshire were a relatively peaceful and gentle part of England.  But during the period of the Wars against France it was home to large numbers of troops on the move as well as being the major base of the British Navy.  Among the ordinary people it might be anything but peaceful.

In 1823 William Cobbett, in his “Rural Rides” remarked on the unhappy situation in Selborne, and The Rev. Cobbold, Vicar of Selborne wrote on the subject.  This situation led to conflict over the tithes due each year to the Church, payable in Selborne’s case to Magdalen College, Oxford, the freeholder of the properties, and in respect of the Parish Rates. The upshot was a serious outbreak of trouble in 1830, in parallel with many others in England, generally known as the “Captain Swing” riots.

In Selborne the unpopular Workhouse was attacked and set on fire.  Then the Headley Workhouse nearby was attacked and a threshing machine destroyed.  There were other violent incidents in Selborne and in neighbouring parishes such as Chawton, and the Yeomanry was deployed to restore order.  Worse still in Selborne, a local hostelry, “The Compasses” was burned down.  The “Queen’s Head” replaced it in 1837.

The consequence was that a number of men were transported and others served long prison sentences with hard labour. Edward Fitt spoke at the trial at the Winchester Assizes on behalf of a Benjamin Smith, who was probably a relative. There were also Warne relations involved, deservedly transported to Australia to mend their manners.

The Reverend Cobbold on the other hand, in contrast to the appeals for mercy made by other clergy, wrote to the Secretary of State for Home Affairs demanding that the criminals be hanged forthwith.  Perhaps having had a pistol held to his head during the disturbances had concentrated his mind.

Given the financial difficulties with which the Fitt’s were then faced, it raises the question of what their position may have been.  Were they sympathetic to or even supportive of anti-Tithe and similar activities, or opposed to the disturbances?  It is alleged that some local farmers encouraged the rioters.

During the 1850's, the Garnett family moved down the road to Hursley and Jane Garnett was still there in 1911, apparently on her own.  It was from Hursley that the Fitt's had come to Selborne.

When all the academics and enthusiasts later in the 19th Century and into the 20th studied the world of the Austen's, it is a pity they did not seek out the servants or their families for their view of the past.