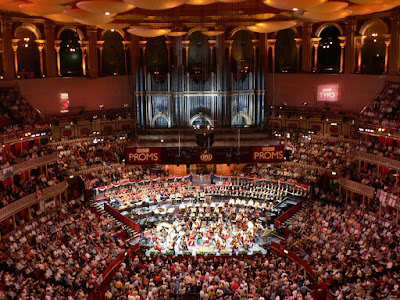 We still have our annual rituals.  Tomorrow, Saturday, is the Last Night of the Proms at the Royal Albert Hall and we have the fuss and hoopla over the last few minutes.  This is the part where they sing "patriotic" songs and wave flags.  Given the number of Proms during the season, add the Late Night ones, the Chamber Concerts and other events, it amounts to around one half of one per cent of the whole, if that.

Yet for many it symbolises the whole.  Sir Nicholas Kenyon, former Director has been wheeled out for the tenth or twentieth time to remind us that it is a two month international event embracing world and many forms of music, old and young, ancient and modern giving an extensive choice.

Having posted on this before and having been in the Arena a few years and at times on the front row of the Last Night, see picture above, I can claim to have been there on done that.  One of these we had an Estonian waving his flag, tactful Japanese waving coloured banners, Germans waving the Union Jack out of courtesy and Italians waving what seemed to be items of female underwear.

If some of the clowns that are unavoidable in public places these days insist on politicising that last few minutes it would be a pity, because in the second half the item preceding it is "Serenade To Music" a lovely piece by Vaughan Williams for which the youngsters tackling it have spent a lot of time rehearsing.

The promised demonstration is said to be Remainers confronting patriotic Brexit people about the Euro thing.  If you scratch the surface of the music and songs this is quite idiotic.  The composer of the music on which "Land Of Hope And Glory" is based, a Pomp And Circumstance March, was Edward Elgar.

He was one of a number of intellectuals who loved and respected Germany, its culture and its people.   The events of the early 20th Century and the First World War were a personal disaster for him.  Have I heard the tune in an obscure Bach cantata?

Also, the composer of "Rule Britannia" was Thomas Augustine Arne, a Catholic, like Elgar in a time when Catholics were suspect and also a Freemason.  This was written for King George II, also Elector of Hanover, husband of Caroline of Ansbach and son of King George I who could barely speak English and was married to Sophia Dorothea of Celle.  He was the son of Sophia of the Palatinate and grandson of Elizabeth of Bohemia.

Another tune of Arne's borrowing from German musical sources, became the basis of our national anthem "God Save The Queen" during the time of King George III.  George III was the son of Frederick, a nod to the Prussian connections, Prince of Wales, who died young, and Augusta of Saxe Gotha.  George III married Charlotte of Mecklenburg Strelitz.

Today Chancellor Angela Merkel of Germany is a lass from Mecklenburg and a lady whose firm ideas on this and that have led to difficulties.  So singing our National Anthem could be construed as a gesture of support for her in these troubled times.  The Bavarians, whom Elgar so much admired, have taken a dislike to her.

In the first half of the Last Night there is a piece by Benjamin Britten, "Matinee Musicales" based on Rossini's music, an easy to listen to and enjoyable musical jaunt.  A quirk of history is that one of Britten's forebear families have a surname and are off the same patch as the servant employed in the Elgar household when he was a child.  How much of his musical interest did he owe to her?

The BBC claim in The Proms to reflect our history of music but it is curious who never appear despite their fame and talent in the past.  One is Leslie Stuart, impresario, composer and librettist of many of the big hits in musical theatre.  Born Thomas Augustine (yes, another one) Barrett, but beginning when another T.A. Barrett was a leading figure, he changed his name.

One of his most popular songs was "Soldiers of the Queen", 1898, which begins, "Britons did once loyally proclaim, about the way we ruled the waves", a nod to the earlier Thomas Augustine.  Wikipedia has the full words under "Soldiers of the King".

Stuart's Barrett family were from County Mayo in Ireland, incidentally, and he grew up in Liverpool close to the Willis organ factory in Liverpool, a branch of the London firm.  It is a Willis organ in the Royal Albert Hall, erected in memory to the late Prince Albert of Saxe Coburg Gotha. I have mentioned before that Edwin Willis in 1881 was next door neighbour to Karl Marx, the well known Prussian German internationalist.

So if we really want to have a change from these old songs now alleged to be tarnished with nationalism and patriotism, why not try "Soldiers of the Queen" in its place.  It could follow "The Garryowen".

I marched to that in Germany when in The Army of Occupation.