Going To The Pictures 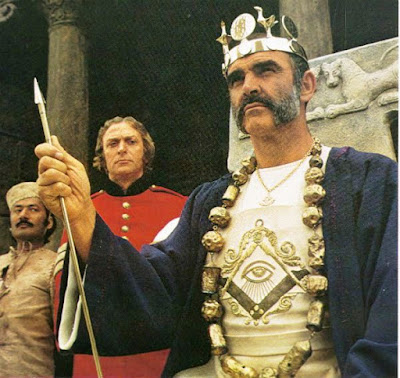 Over the weekend BBC4TV was given over to Keith Richards of The Rolling Stones. On Sunday he chose the film "The Man Who Would Be King", which was preceded by an episode of the cartoon "Captain Pugwash". The Stones were always keen on contrast and there has been an interesting one in the last few days.

Currently, in the media there is the story about actor Marc Anwar in the leading TV "soap", "Coronation Street", who has been sacked for making racist comments about Indians, he being of Pakistani origin. They relate to the recurrence of problems in Kashmir which  arise from differences and hostilities between local groups that go back centuries.

One irony is that the remarks tell us that some things have not changed since the time of Kipling.  The other is that the issues are now with us among the peoples of the sub-continent who have moved here in the last half century. The nature of Anwar's remarks were silly and childish but was it "racism" or was he simply expressing his cultural identity derived from centuries past?

In the film, which I suspect would not be made today, one of the elements of the plot relates to the continuing warfare in the period between tribes and villages whose cultural lifestyle involved killing their neighbours and stealing their women, cattle, and goats. It is set in the fictional territory of Kafiristan; that name would have to go today, to which two unprincipled rogues, likable unless you were stung by them, go to make their fortunes was placed beyond Afghanistan and the Hindu Kush mountains.

But given the period in which the book was written, it may well have drawn on what was happening in Kashmir at the time.  This territory is at the point where South East Asia, that means China, meets the Sub Continent, now Pakistan and India. Kashmir, see the Wikipedia article, has a long and full history of warfare, coming and going and changes in power.

In the film Danny Dravot and Peachey Carnehan, time served former soldiers and sergeants, enforce law and order with Martini-Henry rifles and British Army discipline, centralise power and create a tax gathering public sector authority, intending to make off with the loot to retire to England. Nowadays it would be one of our retired Prime Ministers and their ilk advising on financial services and banking structures for a fee paid into a tax haven.

But Danny then decides he wants to stay, retain power and found a dynasty. Among all this is Freemasonry, Alexander The Great and how Danny came to be regarded as a god.  Unluckily, Danny is bitten by an unwilling wife, the blood making it clear he is not a god and it all goes badly wrong.

Danny finishes up dead singing "The Minstrel Boy", Carnehan is captured and goes mad but makes it back to tell Kipling the story giving him Danny's head and the diadem of Alexander The Great to  prove it.  The lessons that can be drawn are various.  One may be that extensive cultural and ancestral differences and centralised high tax systems of government do not go together.

This would align with Kipling's own thinking. When the Fall of the Rupee was inflicting economic damage in India and the Treasury of India was faced with a serious deficit along with major famine, Auckland Colvin introduced income tax which Kipling satirised.

Upsetting Colvin could have been a sound reason for Kipling to leave India in 1889, returning only for a brief visit in 1891. Kipling, despite being a Nobel Prize Winner, is now off the shelves and an author those fame and popularity are now long past. He has become that relative whom we do not care to mention.  Yet at the time his style and ability to tell the tale made him readable by all classes.

His vision of imperialism, "The White Man's Burden" meant imposing peace and sound government for the benefit of all by self sacrifice. But Kaiser Bill in Germany, who Kipling disliked, had his own ideas and World War One saw the beginning of the end for Imperialism, especially with the USA determined to break the British Empire.

After Kipling's death in 1936 it was ironic that the Labour Party had among its intellectual leaders men whose families had been prominent in the Raj and derived their ideas on central control, planning and government from the way it became in India in Kipling's time and after.

This they thought was the vision for ruling the British working class command of the economy as well as dismantling the Empire.  One of the serious problems of this in the Sub-Continent in 1947 was who would rule Kashmir, the old enmities still not resolved but the British getting the blame.

Which is part of The Burden of The White Man.  We have never really forsaken this idea and indeed it has been taken up by the USA, who took over much of the Empire.  How many interventions, invasions and other warlike or peaceful forays into other nations and territories have been made in the last half century?

Then there is the home version of it, in that our rulers have imposed a regime where nothing may be said or done that gives offence to others or be construed as discriminatory.  It is another irony that one of those to be caught out and punished severely is moved to be rude by the latest conflicts in Kashmir.

There is another matter, it is that our rulers who carry The Burden today are not really persons of high noble ideals and beliefs living a dedicated life to benefit us all by their wisdom and abilities.

In fact, they are much more like Dravot and Carnehan.