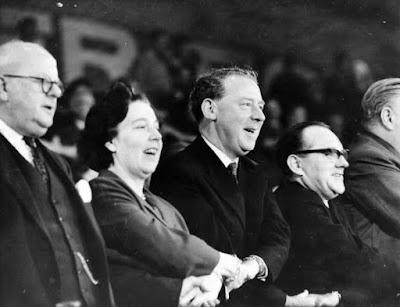 With the party conference season on and hitting the remote control change channel to sport at the hint of a politician or report from these events, we know that between now and 2020 a general election should be held.  My reaction which long ago may have been that this is very important is now more muted and indeed wearied.

The young adult part of the electorate will have been born in the late 1980's and the 1990's.  Their early memories of politics would have been the Prime Ministers Blair, Brown, Cameron and May.  At the other end of the age scale my equivalent was Attlee, Churchill, Eden and Macmillan.  Hardly like with like.

The picture above is of Hugh Gaitskell, Leader of the Labour Party 1955-1963, one of Labour's intellectual Sons Of The Raj, who died young and lost the 1959 election, defeated not just by Macmillan's big spending but the divisions in the Labour Party which the electorate did not like, especially in the depths of the Cold War.  My view at the time that it was a pity that Gaitskell wasn't leading the Tories and Macmillan the Labour Party was unwelcome.

When an election occurred information was derived from cinema newsreels, newspapers, journals and people around me.  Some watched TV news, such as it was, but I did not have either the time or a TV.  These days we greatly exaggerate the influence of TV in this period, forgetting that for many, notably young adults, there were other things to do.

This time round, I like many of the young of today, will be tapping away at my gizmo with immediate access to a wide range of sources, which include some of the press, media and journal legacy of the past but now not the same at all. What politicians say or are reported to say belongs to the realm of another world, one where imagination rules rather than information.

There are great changes from the past.  Retailing was very different and entailed a wide range of contacts on a daily basis.  The ordinary business of life was not the same, again a range of other ways and means. Debt was no go and consumption was not remotely on today's scale.  Education was different etc. etc.  Our young adults of today have grown up on a different planet.

It is not surprising that the major political parties are becoming so fractured.  We live in a fractured world with age groups whose life experience and formative thinking are very different.  Labour cannot rebuild its working class vote because that class of the past have gone into the mists of time.  The lower paid etc. today are not the same and they are changing rapidly in any case.

The Lib Dem's rely on old ideas and structures than cannot be recovered.  The Tories play the media game better, at the moment, but lack the ability to make the hard decisions and apply them thoroughly.  Their shifts, devices, shallow thinking and attempts at making deals and compromises will catch up with them.

The question is when and how.  A major financial bust will mean sooner. So who will the various age groups turn to?

All bets are off.