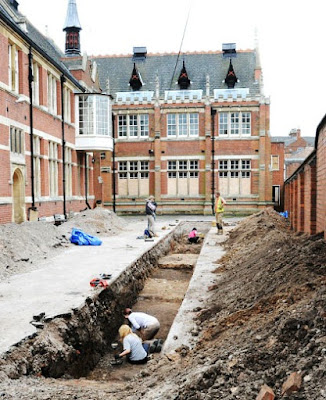 Ms. May reminding us that like Caesar's Gaul, secondary education was once divided into three parts has predictably put up a lot of flak in politics.  Is this serious, or a three legged political horse that will never run but keep Labour etc. and the Education "Blob" busy while other matters are dealt with quietly, such as pensions?

Grammar Schools have a very long history, too long and too complicated for a brief post and is one shared with many of our Public Schools, actually private.  For this it is best to start with the 1940's when R.A. Butler was parked at the Ministry of Education, tarnished with a reluctance when at the Foreign Office to make commitments that might lead to war and questioning whether Churchill was a suitable First Lord of the Admiralty when war did begin.

The Attlee Labour government of 1945 to 1951 had a lot to deal with so education was largely left with the local authorities  Those where the tripartite theory gave serious problems in practice began to have other ideas.  In London where the bombing had cleared many patches and was intensively populated they came to the conclusion that new build was best with large comprehensive schools.

In contrast in Leicestershire County, a Conservative council devised a two stage system with high/middle schools 11-14 plus the early leavers and Grammar/Upper Schools for those wanting to stay on until 16 and take examinations, not quite Grammar Schools for all, but at least with a choice for the parents.  The picture above is the former Leicestershire County Council Education Offices.  The hole in the ground is the grave of King Richard III, history casts a long shadow.

Leicester City on the other hand were well on the way to a tripartite one by 1944 and only needed new buildings and to eliminate the senior classes from the Elementary Schools.  In the broad acres of the West Riding of Yorkshire Sir Alec Clegg, preferring comprehensive allowed flexibility in the type of structure related to what was inherited locally.

The major question was all the building to be done and the cost.  In areas where population increase was occurring and which had priority for Government money it was one thing.  In areas however with static or shrinking population they had to make do and mend.  But it was slow going because of austerity and all the other demands for state spending.

It was rather later in 1958 with the White Paper, "Secondary Education For All" that the final drive began and at the time the debate about comprehensive and selective tripartite was well under way.  So when politicians and others now refer to the Grammar Schools they probably have in mind the larger well equipped and staffed schools serving urban or the forward looking rural areas.

They are also talking in simple terms when that period in fact was one of very complicated forms of organisation and other standards, sometimes quite great.  Also, the economy, the structure of the population and the diversity are very different from then.  If it was complicated enough by the 1960's when politicians threw "rationalisation" and "planning" at every problem it is more so now.  Quite where you start and where you end up is difficult to assess.

Political Betting has an item that discusses the May initiative more fully.  For many it may be Noble but has all the potential to be Bright.  There is the mode of selection.  For some, attracted by the simplicities it might be parental choice, but it is not that simple.    Admitting by some sort of selection that reflects the numbers  local population groups would not be easy and may not guarantee the standards sought.

Selection by strict independent tests of one kind or another for academic potential might leave you with a school with a many pupils of one type of background or population group. Do not assume that they would be Brit's and if they are not and they along with certain others are minimal in numbers then watch out for trouble.

So what exactly do we mean when we say the words "Grammar School"?