The Return Of The Raj 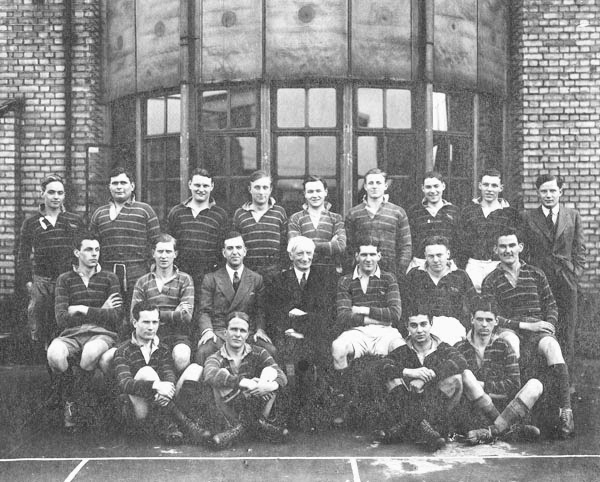 It may seem strange to post a picture of the LSE Rugby Club of 1936-37 at a time when some of its latest successors are under the cosh for crass teenage behaviour but the point of it is the man who is at the centre.

This is William Henry Beveridge, then Director of the School, who had transformed its work and status and built an empire of social studies with an international range and reputation.

Later was he the man who delivered the crucial Beveridge Report (see Wikipedia) in December 1942 setting out the kind of society and state provision that many envisaged for the post-war future of the UK.  He was made a peer in 1946.

It is prompted by this article on the LSE web site about the current links and relationships between the UK and India and how they are moving on from the issues of recent decades.  At the centre now is trading and as in the past as is who gains and who gives.  Today the news that Mata Steel of India is selling on its European and British mills raises questions.

We forget that Beveridge was a child of the Raj and of the 1936 students some may well have been hoping for a career in the Colonial and perhaps even the ICS, the Indian Civil Service. His father, Henry Beveridge, of Scots origins, was a senior judge but more to the point a leading Orientalist in sympathy with Indian nationalism.

Henry, born in 1829 was a young man when the Mutiny broke out which led to the demise of the old Honourable East India Company Service, HEICS, and the takeover of authority by the British Government.   Change had already begun in the attitude and policy to India before this.

The new regime was different in many ways from that of the late 18th and early 19th Century and similarly how rule was conducted and how the British society in India lived changed too.  The old India had seen people like Charles Hindoo Stuart with Charles Metcalfe and not least James Skinner.

William Beveridge was born in 1879 and grew up in an India in which Auckland Colvin was a major figure shaping the Raj that we are more familiar with.  The old was not far away.  Colvin's mother was half sister to one of Skinner's closest officers, Ralph Henry Sneyd, who was also close to Metcalfe, naming a son after him, had been nominated to the HEICS army by Stuart and for good measure ended his service as Commander of the Governor General's Body Guard, later the Viceroy's and now the Presidents.

Sneyd ended his days in Hampshire across the fields from the Duke of Wellington, the former Sepoy General, and next door to Elizabeth, widow of Colebrooke Nesbitt, one of the HEICS Nesbitt's in The City named for the Colebrooke family so prominent in the early Raj.  It was Sir Henry Colebrooke who founded the Royal Asiatic Society in London in 1823, modelled on the 1784 Asiatic Society in Calcutta.

Beveridge was brought into the Civil Service in 1908 by Churchill to add some intellectual bite to the projects of the then Liberal Government.  He did key work during World War One before going to the Webb's LSE in 1919 to promote his ideas on social administration derived from India and Eugenics.

Because the Raj had been run by an Indian Civil Service on a centralised and greatly planned basis with tight controls over subordinate authorities, using agencies and controlled private sector commerce.  It was always that Calcutta, and later Delhi knew best and where all authority lay.

It is commonplace now for it to be argued that the central direction of affairs from London in the UK arose from the two world wars.  This is true because of the demands of those wars.  However the Raj had been born out of many wars and was always at risk of others.

It was the Raj and it's many senior men in politics, government, law, education and administration that bestowed on changing Britain the basic attitudes, mind sets and principles of state control and how to do it.  I can recall from around fifty years ago the number of former colonials in senior jobs in central and local government.

In this way we are all children of the Raj.  But in the 21st Century it is not going to be the British who will be in charge and cracking the whip, it will be the children of our former subjects.

If there is any consolation, in the early Raj it was the practice of many British men to maintain regular local households akin to marriage but not recognised as such by Britain. The result down a number of generations means we have many cousins, distant and unknown perhaps but still sharing our ancestry.

Anyone for mutton curry?