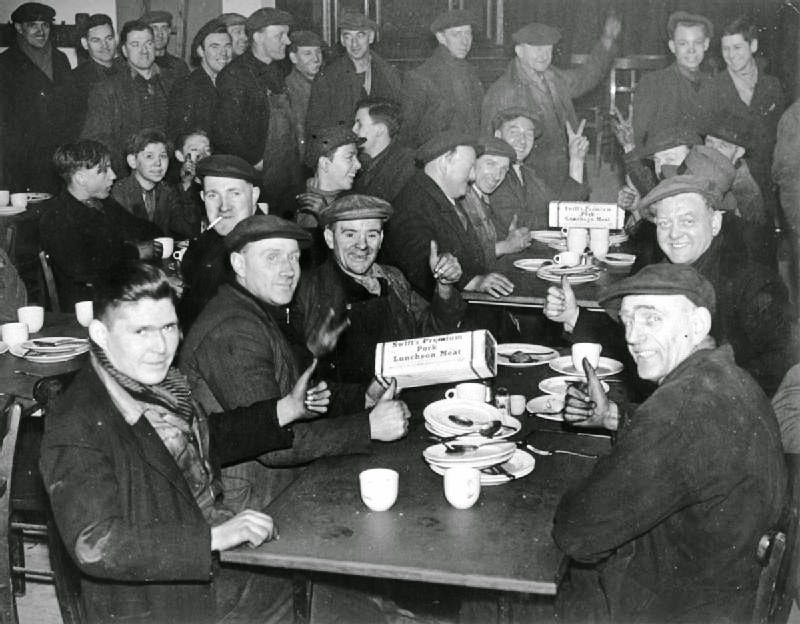 The weather is fresh, wet and windy and takes me back sixty years to an October morning when the Sergeant told us to wear our fatigues (denims) for morning parade and to lay out our kit first to be checked.

The reason for the departure from mindless bull and square bashing was simple.  We were on standby to go to Southampton Docks to take over the work of the striking dockers.  This meant that what might have been the worst part of our national service became a strange interlude of relative sanity.

Churchill and his cabinet had run out of patience with the London dockers who were looking to a national dock strike.  The far Left and men like Jack Dash (see Wikipedia) were seeking to exert control over crucial parts of the economy to bring about a Stalinist revolution.

It was about four years later that I met Jack Dash after one of his talks.  We had things in common.  He was the same age as my father.  Both had been useful boxers and dock work was in the family.

The point of our brief discussion was that had the Army gone in and been allowed to do the work in the way it wanted the result might have been that they would have shifted twice as much cargo in half the time. Jack Dash had been in the Army at one time and knew the risks.

Had the strike lasted a lengthy period instead of ships queuing for berths there would have been berths ready and waiting for them.  It would have laid bare the inefficiency, inadequate facilities, the bane of demarcation issues and the antique management and administration of the docks at that time.

Much of the paperwork was 19th Century in form and function.  Across so many areas of work Britain was slow to change not just in working practices but in supervision, management and many other ways.

It was in this period, 1955, that Anthony Eden became Prime Minister, called an election and increased the Tory majority from a marginal figure to a working one.  At the time there was a strong modernising group in the Party relating to the domestic economy and society and their message appealed to many of the electorate as did concern over trade union power.

But Eden's interest lay in Foreign Affairs and it was here that he blundered into the Suez Crisis by which he came to be known to history.  Whether it was fully his idea or the benzedrine he was on at the time is now a matter of debate.  He failed and we had Macmillan, another Foreign Affairs man who avoided difficult decisions in home policy.

What is striking is the way much of Tory domestic policy in the brief time of Churchill's later period running into the time of Eden prefigured that of Margaret Thatcher twenty and more year later.  After it was the lost generation of British politics when we failed to admit, recognise and deal with the changes that were under way.

Hugh Gaitskell, for a short period Leader of Labour after Attlee, recognised it but he died too soon and we had Wilson, a numbers man who fiddled the figures and sincerely believed that a statistical plan would work.  Heath took us into Europe as the answer and now we realise that Europe is the problem.

It is one of the "What If's" of history.  Overall the Eden cabinet had a strong bias to Foreign Affairs.  There was still the view that the future lay in being a "Great Power" and the economy was a secondary priority.  Had he structured his cabinet to provide a better balance and to realise  and grasp the greater need for far attention to domestic issues it might have been very different.

For some time Jack Dash and others had their day.  But the world had begun to change more radically than any of them knew or might understand.  Containerisation of cargo had begun, which transformed transport costs and capability and now the old docks have gone.

And so have the dockers.