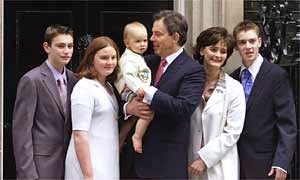 The article below was written in 2001 just after the election of that year.  It is 1600+ words and slightly edited for redundant material.

THE GLASS IS FALLING - A CONTRARY ELECTION

The Blair Bounce Election of 2001 has been a strange experience.  All along it has had the whiff of 1959, when McMillan’s Conservatives should have been punished for the grotesque adventure of the Suez Affair, their dissembling arrogance, and the cavalier treatment of the public purse.   Again, an electorate befuddled by style, unsure of the future, and lurching to the apparent safety of the certain have given authority back to an undeserving and creepy bunch of hoods.  So what happened this time, and where were the Tories?

Who are these Tories?  Apart from Hague and a handful of others they were strangers to us all.  It is possible for a party to be elected as a more or less clean slate of unknowns, Blair managed it in 1997 against the Tory misfits, but it is much better for a team to have made an impact on the minds of the electorate.  This is something that had not happened, and it is worrying.  Was it simply a failure of strategy on the part of the Conservative Party, or has the media drifted away so much from routine and day to day politics and issues that we no longer know who is in the frame?  During the election most of the tabloids were rarely deflected from their style and celebrity sensations, and even the broadsheet newspapers gave cursory attention to any but the leaders.  If the media cannot be bothered with the second tier politicians then why should the voter?

A part of the problem now is that few members of the House of Commons have ever done much of a real job.  As one pensioner put it, they don’t know one end of a shovel from the other.  This means that in dealing with the world of work, the getting and spending, and realities of the ordinary jobs, they really have no idea of what goes on and how things are organised or done, and it shows.

At one time the typical Tory could claim that by and large most of them had more experience in actually running real things than their Socialist equivalent, the sons of toil, but that is no longer true.  The generation who had some idea of how to react when things got rough quickly and things had to be done fast and firmly have gone.  Blair and Major both, as well as their advisers, have been flustered and floundering in these situations.

Also, the Tories do not lie convincingly, when they have needed to temporise there has been the tell tale slack in the mouth.  Their inexperience has meant that many have retained the habits of childhood, the wide-eyed frankness and the excuses that just get you into more trouble.

New Labour with its essential qualification of a total lack of any concept of truth has been able to lie with impunity.  If anything there has been the smack of admiration amongst those voters in commercial life and especially in the public services for whom toughing it out is an article of faith.

William Hague has been worse off in having Sir Edward Heath, the Beast of Bexley, to contend with.  In addition there has been Boyo Heseltine The Dome, the very sundry fans of Europe (Prodi and Kinnock Rule OK) led by Napoleon Howe, and as an occasional comedy turn, Baroness Thatcher, to distract people from his message.

Can anyone remember what the policies were, and did anyone really know in the first place?   Oliver Poole, one of the great Chairmen of the Conservative Party averred that it was necessary to have your ideas firmly planted in the public mind a good six months before an election.  Then you convinced the voters that you had a grasp of the essentials.

It is more difficult today, when there are no longer the great issues of war and peace, and we have accepted some of our limitations. Additionally, the media driven need to go after what is defined as a story about human interest or the latest gruesome sensation, remains a formidable obstacle to putting over a closely argued case on the needs of the future.  Moreover, the voter has become convinced that matters like health, education, and race are the only real items and are not secondary to the critical concerns.

Is it possible actually to have a set of policies as a means of guidance for the voter?  The movement in the Nineties to legislation on the hoof, running sloppy regulations and directives past Parliament in a hurry, and taking on board as policy the latest utterance of the more influential pressure groups and public relations outfits, means that government increasingly is a game of hopscotch.

So when an opposition leader attempts to say that policy is important then the counter argument is simply “Trust me when it happens”.  In a world of real and media uncertainty and incompetence it is very difficult to counter this claim.  The next Conservative Leader can hope only that something comes up which causes Blair to blow a fuse big enough to lose the faith of the masses.

One of the paradoxes of history is that in 1959 there was an electorate, most of whom had left school at fourteen or earlier having had only an Elementary School education, but possibly were better informed with less media facilities.  The much longer educated voter of today with a multiplicity of news sources and providers of information, arguably knows little, and cares less.

Gaitskell observed that he would fight, fight, and fight again, for the principles he believed in, which may have been a factor in his losing the 1959 election.  The British seem to be averse to this sort of open pugnacity in their politics.  They prefer to be lied to with honeyed words and told things are easily accomplished and at much less cost than anyone expects.  This is the basic reason for so many of our financial fiascos in central and local government.

Corelli Barnett has observed that Tony Blair is not a man he would care to be with in a slit trench with when the bullets start flying.  He has missed the point.  Blair is well aware that he who fights and runs away lives to fight another day.  William Hague has given the appearance of being a bit of a bouncer who wants to get on with it.  Politically this is not the British way.

BACK TO THE FUTURE

In the late 1940’s Bevan took the local arrangements for health care in Tredegar, which worked well in the context of a Welsh Valley, and made them the template of the National Health Service of the future for the whole of the UK.  At the same time the Government imprinted on the public mind that there was a finite end in sight.  As I heard Attlee say in 1950, “It will take a long time and we will have to work very hard, but we will get there.”  The trouble was that there wasn’t any “there” to arrive at; the destination was always going to be changing, as well as the roads to be followed.

The combination of Bevan’s single model with mid 20th Century administrative systems was fatal to the idea.  The NHS was badly flawed at the outset, and all the reorganisations, initiatives and the rest, have simply added to the confusion.  At least in 1959 you could reckon on a clean floor and a tidy bathroom and food in the mouth. The indescribable filth of so many hospitals and the sight of the incapable old starving in their beds for lack of staff to feed them is a testament to the capabilities of our civil service and political system.

It would be possible to go through a litany of failures and incredible stupidities, and one wonders how the government of the day got away with it all.  But they did so there should be little surprise that despite its manifest weaknesses and failures the government of Blair and his associates have survived, trading on the weakness of the electorate when faced with the need for change.

When the results began to come through in 1959, we were disbelieving of what we were seeing.  Surely they were untypical?  How could the shyster, Supermac, as they called Harold Macmillan, be going back to Downing Street?  The historians have pored over the subject, but have not come up with convincing answers.  Was it really the fear of radical change?  There is one possibility, though, a remark made at the time by a senior lady Labour councillor who knew her ward and city better than any.  “They thought we were going to close ITV down, and didn’t want to lose Take Your Pick.” she said, talking of the virulent reaction of many Labour leaders to the introduction of the commercial television channel and the new world of game shows.

So what did the electorate of 2001 think they were going to lose?  I am at a loss here and can think only that the price of houses may have something to do with it, but that is a weak and tentative gut reaction, and probably wrong.  The worry is that in 1963 the electorate lost Gaitskell as an option and in 1964 finished up with Wilson after Macmillan finally blew his fuse and left Home with insufficient time to make up lost ground.  This gave us the dreadful combination of Heath and Wilson and the abandonment of any future for Britain.

Surely, we can do better than that?  But it all may be academic.

In the eighties, there were commentators who predicted that the Conservative government of the day could rule forever.  In the nineties, they self destructed, but can New labour be trusted to do the same?

Not much has changed.