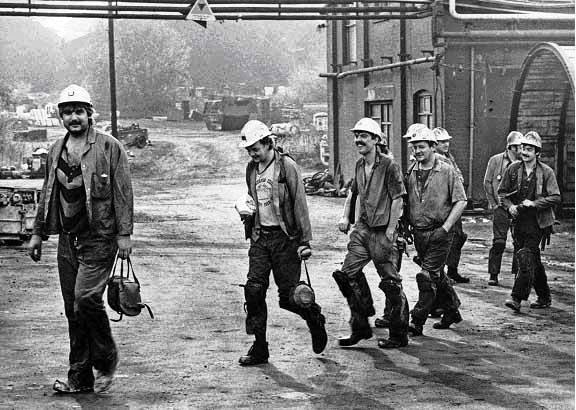 There is a new film on release, information around the web, called "Pride", the story line being of gays etc offering donations and help to the miners during the strike of 1984-1985.

It is said that the National Union of Mineworkers, the NUM, then led by Arthur Scargill, were a little reluctant to take the money publicly so the gays went to Wales to deliver it in person.

Possibly, this was because the Welsh were politer, more tolerant and willing to embrace all those who helped them.  More likely it was because in South Yorkshire the reception would have been distinctly frosty.

Another matter was that in Wales it was probable that the money will have gone to struggling miners' families.  It was patchy overall, but in some areas little was passed on.

Apart from all this the basis for the story is what is now the received history of the Miners' Strike, largely the version given by the Left and its associates.  It is a pity that the real story has never emerged.

It began with a cock-up, the usual kind and one that many of us are familiar with.  Essentially, a couple of muddling Alpha males in the wrong place at the wrong time acting in haste and unwilling to admit error.

In the area of South Yorkshire in question, the Cortonwood Colliery was one of many older pits, close to each other, that had been worked for some time and much of the good and profitable coal had been extracted.

It was routine for the National Coal Board in these cases via their regional offices to come up with options for future workings.  Some shafts would close, sometimes a new one would open and sometimes seams would be worked from another adjacent shaft in a merger of collieries.

This was the case at Cortonwood and the NCB were bound to consult and discuss the matter with the union at a colliery to come to arrangements for the deployment of men and the relevant details of future workings.

But the union man at Cortonwood was also a long standing local politician. He liked to keep things to himself and was reluctant to make concessions.  So, he was indecisive but liked to be in charge but delayed and distorted issues and distanced himself from anything difficult.

More to the point was that he lived only streets away from Arthur, who was a friend and regular contact and whose offices were yards from the local Council offices.  They had known each other for years.

After some time struggling to get answers from the local union man; any response as to what might or might not be done about the increasing and dangerous difficulties at Cortonwood the local NCB decided on a merger, soon.

Effectively this meant the end of the Cortonwood shaft, but some work going to the neighbouring pit down the road.  When the final offer was made, the union man realised that not only had he blundered but he had lost his personal power base.

So he was round the corner to Arthur like a shot.  Both then and in later years the perception of the NUM was that it was a monolithic organisation.  But like most organisations it had its divisions and dissents never mind the never ending rivalries.

As recently arrived President, Arthur was affected by all this as well as other pressures.  The NUM had a creaking and old fashioned administration and an organisation of the past which led to difficulties in the formulation of policy.

He wanted to stamp his authority over the fractious and overly sensitive senior officials and to use the potential power and national standing of the leadership of his union.  Here was a cause in his own back yard, literally, and he could not ignore it.

The NUM as a whole were blind to the mountains of surplus coal and associated slag heaps that had been created in Yorkshire and other places in the previous few years.  Locally they were called The Yorkshire Alps.

They were also blind to the fact that the senior ministers in the Thatcher government were unlikely to repeat the mistakes of the previous decades in dealing with NUM action.

The rest, as they say, is history.