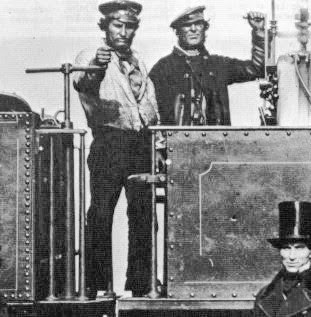 In spite of all the world's troubles the question of whether we have yet another fast railway to the north still is at the forefront of our politics.

This time round it involves the question of HST2 going by Stoke on Trent or Crewe.  This is exactly the same debate that occurred at the beginning of the railway age.

In those robust days large well funded companies were not above bribing, bullying and bull baiting the politicians, media and others that mattered dancing fleeting figures before their eyes.

The base cost of the present HST2 caper has sneaked up from 14 to 50 billion.  Probably, it might be multiplied by four to get anywhere near the real figure should it be built.

If it is the contracts will likely go to foreign firms and the work done largely by foreign labour.  It will never ever yield any return on investment and the interest on the debt involved could well be much above present figures.

This lovely old song says it all in three minutes.  They don't make films like this one any more.  But we are still making all the same mistakes.