Getting A Move On 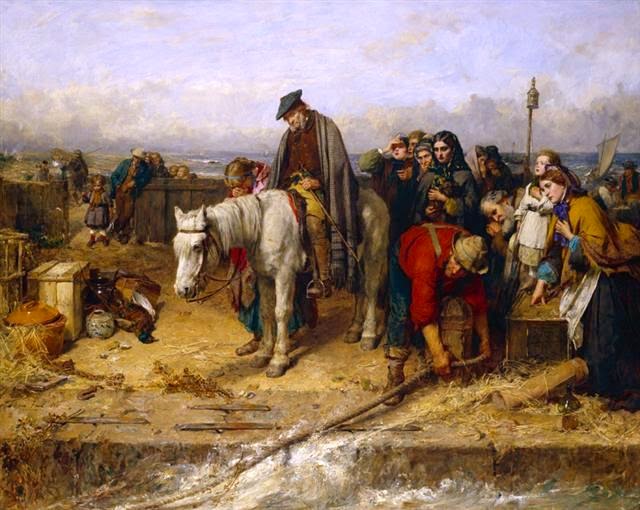 The debate on immigration into the UK veers between ancient prejudices of one kind or another, waffle and several types of idealism untroubled by the facts or history.  The latest example is Vince Cable's oration to the Liberal Democrat conference telling us it is for our own good and how we all will be happier for it.

People do move, perhaps all of us are the products of complex movements of our ancestors in the relatively recent past both within and between nations.  If I go back to around 1800 there is a scatter of mine across the whole of the Atlantic Isles.

A lot were part of what amounted to large scale migration from across the uplands especially and other rural areas of all parts of Isles as subsistence economies collapsed because of adverse conditions and pressure of population growth generally.

This was compounded later by the Great Agricultural Depression that began in the late 19th Century and lasted until the 1940's.  Some was smaller scale.  Younger sons or daughters having to move on to other places.  Employment ambitions, military service, the attractions of towns or cities or just to get away from a village with a tiresome laird or squire.

What too many of the comfortable theorists and others do not see is that around the world the pre-conditions are in place for extensive large scale movement.  In fact it has already begun in many small ways and for the usual reasons and the real questions are how big and how fast is it going to be.

Just as in the past people moved on a large scale to where the options seemed better and to where they could either enforce their presence or just take advantage of divided or complacent existing populations.

A key question is the balance between incoming and outgoing numbers.  If the difference is marginal it is one situation.  But if large countries have increased numbers going out then while the numbers may be a small proportion for that country, it will be a larger proportion for the smaller countries that receive them to one degree or another.

What is more is that if a lot of larger countries lose what is apparently a small proportion of each of their populations if those outgoings are concentrated as incomers in only a few smaller countries what may be low level for the big becomes large scale to the small, in some cases almost mass migration.

As far as the UK is concerned we have strong links to the old Empire and this includes many places with fast rising populations which are generating increasing numbers of outgoing people.  They are losing small proportions, we are getting higher and increasing proportions as families or even tribal groups move.

We have added to this the European dimension and others from beyond these places.  Many have come and more are on the way.  With them often come their young for education, their old for the benefits and their sick for treatment.  Those who work in turn will hope for access to our social security provision and housing.

The breezy assumption that this necessarily mean economic growth is true only in the sense that more population means more money shifting around in gross terms.  In other terms the effect can be to reduce real earnings per head and create added costs in social and housing provision.  Many will work for low wages that in turn add to the demands.

We are being told in the run up to the elections that there are great problems to be solved across whole sectors of the economy and in public services and the politicians are playing the blame games.  Yet the election is likely to deliver what will be a no change system.

Is it already too late?