Tory Party Conference - Will It Hit The Buffers? 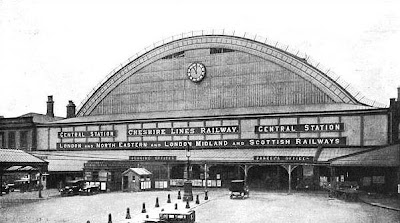 Nearly forty years ago, I was instructed to attend a conference in Manchester, mercifully only for the day. It was at a place called the Free Trade Hall, now long forgotten and was about education. I was there to find out where cuts were likely to fall. The star attraction was the Secretary of State, a lady called Mrs. Margaret Thatcher, the statutory woman in the Cabinet, who was alleged to have opinions on the subject.

It was a bad speech, poorly organised, platitudinous (she was up against an audience lacking in sympathy for her politics), and evasive. Moreover, whoever wrote the speech had put in jokes concerning the handicapped that were in rank bad taste. This was well before the media men had put her right on a number of things. I came away with the opinion that she had been over promoted. “Forty years on when afar and asunder”, but that is the Harrow song, not an Eton one.

Over this weekend we have been given a “walkies” shot of Eric Pickles, the Man of the People, and David Cameron in the city going past the Conference Centre. Had David been shorter and Eric been taller, it would have come dangerously close to being a Laurel and Hardy tribute team, but without the laughs and tears. As it is the significance of the location seems to have escaped the entire media.

The centre is the former Manchester Central Railway Station, and the picture above is from when first I knew it at the end of the 1930’s. It was nothing to do with the Great Central Railway; that ran from London Road. Nor was it originally really central in Manchester, Victoria and Exchange were that. For the history etc. go to Disused Stations Dot Org Dot UK for a good summary. I travelled through it enough times to come to regard as less than a haven, more a tiresome delay in a long journey from and to the East Midlands.

It ended its life as a station in 1969, and lay unloved and unused for many years before becoming an exhibition centre, and now something else. More a mirror of our times; once a busy communications, transit, and goods entity, its closure marked the beginning of the end for industrial England. It was derelict during the 1970’s and then became a showplace for whatever. It is now a talking shop for public sector managers who have risen via consultancy, lobbying, and politics. Whether the Tory conference will mark the beginning of a new age, or the disastrous culmination of one just ending, who will know?

It is not likely I will watch much of the proceedings, if any. These conferences are not fun and you learn very little. There will be some things in common with the past of Manchester Central Station. A great deal over heated air will be expelled. Smells you cannot quite detect. Fires will be stoked to get things moving. Large numbers of men will be in search of the nearest alcoholic refreshment. There will be possible meetings of impossible minds and some passionate groping for attention. Slippery wheels, squealing motion, shrill whistling, clunking signals, and a lot of baggage getting in the way.

But in my mind I would hear the clatter of the past, the swish of steam and smoke, and old voices crying information and instructions, all with effective purpose and intent. People who knew where they were going, why they were going there, where real things happened, and those at work knew what they were doing.

Quite unlike any Party Political Conference.
Posted by Demetrius at 10:23