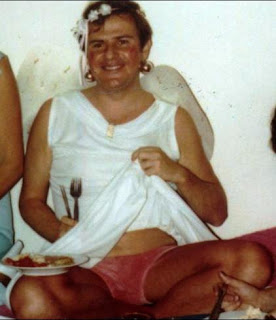 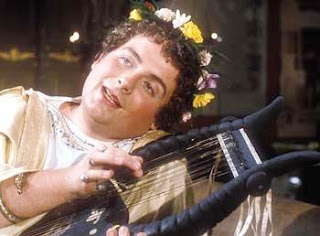 According to recent Archaeology, it is possible that in the recently conquered Londonium of the the 1st Century AD the Romans erected a major building in tribute to the the Emperor Nero. In my last post I mentioned Lord Myners, the representative of The City close to the Prime Minister, if only to suggest that he was a major influence in the affairs of Government.
Seeing the picture of him, above, in Old Rightie's blog, it brought instantly to mind the portrayal of Nero in the series "I Claudius" of the 1970's. Guess which picture is which, a clue is which one has dropped a small wrinkled gherkin down his underpants.
Nero famously was a man who sang for his supper, and composed songs for others to sing. He was an actor who played to audience who were forced to watch and applaud, or else. He took part in an Olmpics to be awarded the prizes for events he did not win. His personal life was complicated in the extreme, and he seemed to have a general availability. He was widely distrusted, persecuted Christians, and enoyed roasting people alive. In the end he provoked a revolution, and left a chaotic legacy for his successors.
Quite different from Lord Myners, well, up to point, Lord Copper.
Posted by Demetrius at 17:38