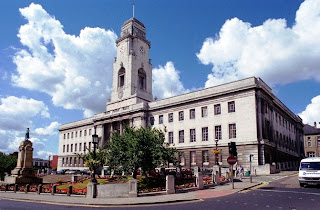 My comments in the post on Elections, Elections, Elections, of 11 October are coming truer by the day. Another six months of stunt politics will be wearing and damaging, and could have the effect of turning off even more of the electorate, with another, greater, reduction in turnout.

With regard to the latest kerfuffle, involving Nick Griffin of the BNP (British National Party), he is just another perishing Oxbridge law graduate peddling his personal take on national socialist extremism, so what do you expect? To realise why Labour is in such a panic, remember that the BNP party has shifted its balance from London and district to the old industrial areas of the North and Midlands, critical to Labour in England. Then look at some of the figures, and recall a little history.

There is Barnsley Central for example, in the late 1970’s Labour came close to losing Barnsley Council, but not to the Tories, or Liberals, but to a ramshackle group of malcontents called The Ratepayer Party. Even Roy Mason began to feel the heat at one stage. Eventually they dissolved into a disputatious bunch and Labour regained ground, but at one stage it was a close call.

Barnsley Town Hall, above, was opened by HRH Edward, Prince of Wales in 1933, a reduced version of the Stormont Government building in Belfast opened by the Prince a year earlier, he must have done a double take when he arrived in Barnsley. Edward later did not last long as King, perhaps the Barnsley Chop he was given for lunch fatally impaired his sense of judgement.

George Orwell in his book “The Road To Wigan Pier” roundly denounced the new Barnsley Town Hall as a gross waste of public money on a prestige project benefiting only the local elite, as did other socialists, given the lack of decent housing in the area and the severe local problems at the time. Like so many people since, he may have had problems finding the toilets there.

In the council chamber the friezes were in ancient Greek styling, and it was possible to discern the shape of the swastika in the decoration. Within a year or two this became a continuing embarrassment. The committee rooms also doubled as civil marriage places, something that could lead to confusion amongst councillors straying after too good a lunch in the Members Room. Polygamy was frowned on then, even in Barnsley.

In 2010 what could happen in this constituency, at present held by Eric Illsley? No prizes for guessing his academic background, yes, law again, although at least he is local in background and schooling with his degree from Leeds, then an industrial city. He will remember that period, and knows it could happen again. That may not be enough to save him if the figures go bad on him, but what do they look like?

In 2005 less than 50% of the electorate of 60,768 turned out, only 28,643. Of those Eric garnered 17,478 of the vote, less than a third of the total electorate in a Labour stronghold. The Lib Dem was 4746, the Conservative 3813, and the BNP 1403, plus some others. There might be a Green next time round, but despite the attention to “green” issues there is very little reference to the party and its members in the major media, so it is difficult to see them making much headway there.

Assume that the turnout declines further, say to 25,000, allow that up to two thousand old Old Labour have died off or gone away, and that the Labour vote collapses. If the Conservatives and Lib Dem’s gain a little ground, say getting 9-10,000 between them, that is increasing their combined share, with the Greens and others picking up about 1500, this leaves say, 13,000 to 14,000 to be shared between the BNP and Labour. If the BNP poll 7500 then Eric and Labour are sunk.

Yes, indeed, out of an electorate of 60,000 or so, the BNP could take the Barnsley Central seat with only 7500 votes. This is what you would call the democratic deficit arising from first past the post electoral systems, when democracy can go badly wrong. Given that Labour has for twenty years managed to manipulate the Boundary Commission recommendations to load the system in their favour, because of the doziness of Conservative Central Office, it is a grim reminder of how this kind of politicking can backfire.

As for figures, if you look at Blackburn, and apply similar calculations to the electoral situation there, it could be goodbye to Jack Straw. With such a prospect the YouGov poll suggesting that one in five might consider voting BNP makes sense to even the most rational analyst. So this election is going to be one of the nastiest on record. Are you sitting comfortably? To ask Lenin’s favourite question about Barnsley, “What is to be done?” Expect a large chunk of government spending to be hurled at the area, already heavily dependent on the public sector.

Perhaps Eric, Rob Ainsworth and others will suddenly rediscover the heroism of the 12th and 13th Battalions of the York and Lancaster Regiment (The Barnsley Pals) at the Battle of the Somme in 1916 and in later battles. Also the 49th West Riding Infantry Division that went into Normandy in early June 1944 to endure some of the worst of the fighting in the Cotentin, and who in the course of distinguished service later liberated Arnhem. Perhaps The Light Dragoons will once again march through the town with fixed bayonets as they did in the shape of the 13th/18th Hussars, one of their merged cavalry regiments, who landed in Normandy on June 7th 1944 with 8th Armoured Brigade amongst the first of the battle tanks.

As the town football team struggle in the Championship, will some referees be receiving “advice” on their mobiles? Will the local council at last be able to disentangle fact from fiction in its accounts? Will a large bronze be erected of Arthur Scargill downing a pint or ten with Michael Parkinson and Dickie Bird in the “Tom Treddlehoyle”? Will the BBC suddenly change its mind about Parkinson being an interesting subject for the family history programme “Who Do You Think You Are?” and go big on mining and farm labouring?

At one time the Elmhirst’s of Dartington, the centre for much in modern arts and music were the very same as those of Worsbrough, by Barnsley and holding seats and influence on the Council as the only Socialist intellectuals in the area. But one thing I am fairly sure is that there will not be a Sir Harrison Birtwhistle festival compelling attendance from local politicians, although Eric may demand that his music become central to the National Curriculum.

Like much else in history there is a bleak irony involved in all this. The Divisional Insignia of the 49th West Riding Division was a polar bear. This arose from the posting of the Division to Iceland between 1940 and 1942 to secure it from Nazi invasion. Near seventy years later it is Iceland that is involved with so many of the Labour Governments recent disasters, and a national socialist may win the Barnsley Central seat.

Will Labour send in The Dragoons? Will the band be playing the “Garryowen”?
Posted by Demetrius at 09:34