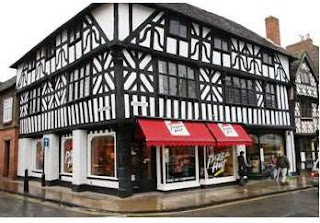 One of the major eating houses of the Midlands of England is the Pizza Hut at Stratford-upon-Avon on the corner of Ely Street and the High Street. It is one of the few surviving ancient buildings following the many fires of the 17th Century that destroyed much of the old town. There is no evidence that William Shakespeare ever ate in this building, although it was unlikely to be a pizza eaterie or take-away at the time. As he was an inveterate freeloader, it is possible that he had a free lunch there at another person’s expense.

There are echoes of the past, from the unhealthy diet and the way the remains of meals are strewn about the neighbourhood. They relate to the ancient beliefs of making oblations to their ancestors and the local gods. The archaeologists of the distant future will look on these remains and wonder in awe at the peoples who lived lives of such intensity and complexity.
The term "hut" an Anglo-Saxon corruption derived from Germanic sources, more recently known as an anthem to St. Elvis of Memphis, the hermit who lived in a dwelling so small he could never stand up in it, "The Little Hut". But "Pizza" has an ancient British meaning. In the Pre-Roman days the sub-tribes of Dubrovni of the Midlands, the Tin Oss, the Moreis, the Arm Strong, the Jags, Root, etc, were feared for the speed and aggressive way of handling of the chariot on the field of battle. Even today outsiders venture into the motorway ring roads around Birmingham or Coventry with fear and trepidation.
The particular technique of these warriors was to ride straight at and over the enemy reducing him to a mangled heap of pulp, at which the victorious charioteer would cry "Pyggeroffal” in the local dialect, a nasal one confusing to those not familiar with its intricacies. In linguistic terms little has changed amongst the peasantry in the last two millennia.
After a battle the victors would eat such remains as part of their celebrations.When the Roman Legions (the merger and acquisition dealers of their day) encountered these tribes, they eventually triumphed by reason of their ability to stay sober for more than an hour and willingness to communicate with each other rather than engaging in a fierce debate when any decision had to be made. They still sustained serious losses.

As the basic Roman diet at that time consisted of a hardened pancake of unleavened bread with a thick fish sauce (garum) coloured and made palatable by strong spices, it closely resembled the mangled pulp to which many of their comrades had been reduced. Consequently their basic food became a "Pyggeroff" . The Romans absorbed local cultures from most of their domains.
This word was taken back to Italy as a description for the food. Down the centuries the meal sadly has been debased into a flat white bread soft circle onto which anything can be tipped and usually coloured with a cheap tomato sauce; hardly the stuff of the warrior classes. The word also has been corrupted under the influence of changing speech patters into the easier and sloppier "Pizza" with the decline in the vigour of modern generations.

Whenever you have a take-away "Pizza", and contemplate the past, it can be a totally new experience, although the rumbling you will hear and the pains in your abdomen will have nothing to do with chariots or the heat of battle. There will soon be a new type of Pizza on the market, when the Lisbon Treaty has been ratified.

It will be called “Berlusconi – The Treat of Rome” and will consist of a lump of very ripe fat cheese between two tasty bits of young rump lying on a bed of oily salad, above a subsidised GM bread base and surrounded by capers and wine soaked cherries. It goes very well with a strong country Sicilian wine.
Posted by Demetrius at 09:53