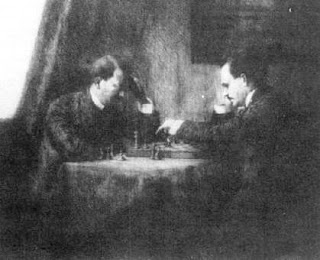 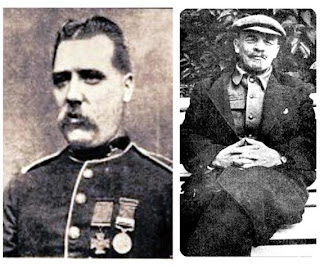 An item has been for sale online, said to be an etching made in 1910 of Lenin and Hitler playing chess together in a room in Vienna in the house of a mutual friend. Perhaps, the bit that worries me is the etching. This is skilled, expensive, and takes time and trouble. Anyone recording this event would have been more likely to make a quick sketch of one sort or another. Also, there must have been many more interesting people in Vienna playing chess or talking together at the time. Hitler was an unsuccessful artist, turned 20, and going nowhere. Lenin was just another middle aged political thinker and activist on the run from Tsarist Russia, ageing and seemingly with no real future.

The other tale about the travels of Adolf that had attention in the past is the one about his supposed visit to Liverpool between November 1912 and April 1913. Based on a suspect memoir by his sister-in-law, Bridget (born Dowling), whose husband Alois Hitler; step brother of The Fuhrer, was working as a waiter in Liverpool at the time, it became the plot of an imaginative and readable novel by Beryl Bainbridge that was turned into an interesting TV item. As ever the myth overtook the truth. Detailed research in Vienna suggests that such a visit was never made, and that Bridget was making up an Irish whimsy later in life to help sell the copies of her life story. It is a great pity, in 1913 both my parents and their hordes of families were roaming the streets in which Alois and Bridget Hitler lived and worked. I could have come up with all sorts of wild fantasies.

A much better prospect for men who might have met and talked is a pairing that many would feel very unlikely. It is Lenin and Hook, one of the 13 men who won the Victoria Cross at Rorke’s Drift in 1879 when just over 100 men held off and defeated a Zulu Impi with a force of up to 4,500. They were certainly in the same place at the same time and for a year, and with interests in common.

In April 1902 Lenin, born Vladimir Ilyich Ulyanov, was in London under the name of Jacob Richter, to avoid the attentions of the Paris agents of the Okhrana, the Tsarist Secret Police of Imperial Russia, and he stayed until May 1903. At the British Museum he was issued with ticket number A72453 to give him access to the Library with its vast resources of books, and he spent a great deal of time there researching and writing. One minor speculation is where he preferred to sit, perhaps seats G7, H9, R7, R8, but the favourite is L13 because of its nearness to the reference shelves. Of the many attendants around, one would have stood out.

Alfred Henry Hook, who had dropped the Alfred early in life, known as Harry, was by then around 50, and perhaps already affected by the TB that was to end his life in 1905. He had been employed there since the 1880’s. After earning his VC in 1879, and with permanent injuries he had bought out, and in 1881 was working as a groom to a General Practitioner in Monmouth named George Willis. Not long after he was employed at the British Museum as an attendant, and signed up additionally with the Royal Fusiliers, The London Regiment, 1st Volunteer Battalion as an instructor, rising to be Sergeant. The Volunteers were the predecessors of the Territorial Army, and often functioned as feeder units to the regular Army.

There are reasons for Lenin to check Hook out. One was that as a figure of authority he was more likely than most to be asked his opinion about this “Mr. Richter” if the Special Branch had been alerted by the Okhrana and were seeking information. The logic would have been to test the possibility. Intellectually, however, would anyone with such an enquiring mind and intelligence of Lenin, miss the opportunity to have an occasional conversation with a man of this experience? It would not have been difficult, because Hook was temperance, and as busy men both may well have used one of the cheap tea rooms in the vicinity before going on to meetings, as Lenin would, or the Drill Hall, as Hook would. Even fifty years later, it was surprising who you could just bump into when going into a Bloomsbury tearoom for a quick cuppa and a sandwich.

Imagine, a foreigner with little income, but with a trained legal mind, high academic qualifications, and a great breadth of knowledge, asking plain reasonable questions to an older man to help him towards an understanding of this or that in the news in Britain. The end of the war in South Africa, a new Prime Minister, the crowning of the new King, the British in Somaliland and West Africa, the troubles of agriculture in the Atlantic Isles and more. Hook was a countryman by birth, one of the many who joined the Army for employment and training. As for Empire, Hook had experienced the full reality of it at the end of his bayonet, and had been involved with many men since who had seen its further shores. He would have been able to make informed and incisive comments about the South African War of 1899-1902 and the business in Nigeria.

It is speculation, and no more, but what might Lenin have learned from Hook? Lenin at the time was interested in agrarian issues, colonisation, political structures, and the extent of financial interests. In military terms, it would have been organisation, discipline, tactics, the ability of a small well trained group with the motivation and leadership to withstand and overcome what was in theory a vastly superior force. In 1914 the Old Contemptibles, the small regular British army, stopped the might of the German Kaiser’s Imperial Army by its rifle skills, discipline, and bayonets.

To understand Hook you need to forget the film “Zulu” and totally clear it from your mind. It is “Hollywood History”, not as bad or idiotic as most, but certainly with many adjustments to the facts and in particular the portrayal of personalities. Hook of the film is a travesty, as are other characters, notably Dalton, but to a lesser extent Chard and Bromhead, both highly professional soldiers who at the end of the battle shared a bottle of beer found in a burned out wagon. Hook was a sober, capable man, probably with a West Country accent, literate and able to communicate well enough. He would have been a good man to talk to. I believe he always remained a country man, because he returned to his home village, Churcham in Gloucestershire, to die. There is no statue to him anywhere; he has only a simple grave in a country churchyard.

If they did meet and talk a time or two, it might have been this quality and a direct sense of purpose that may have impressed Lenin most of all.