Parliament - How To Deal With Members Expenses 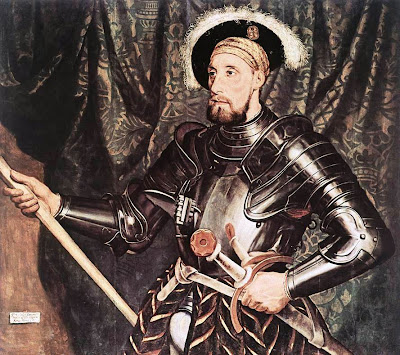 One of the more constructive suggestions for dealing with the expenses of Members of Parliament has come from Man In A Shed, which is to accommodate them in the Tower of London, with its private admission facility at Traitors Gate. The Tower is large enough; it once housed a battalion of the Royal Fusiliers and for a short time before their desertion the Kray brothers were there. For those Honourable Members who have been most imaginative with their expenses claims in the past, perhaps there could be a dedicated Kray Wing with extra features, racks, thrumbscrews, iron maidens etc, with its Mad Frankie dental surgery.

This would not be new, Sir Nicholas Carew, above, was a Member of the House of Commons in the late 1520’s and 1530’s, as a Knight of the Shire for Surrey, before he was taken to the Tower of London to be beheaded on 8th March 1539 for treason, on the basis of very dodgy evidence. He was granted the mercy of beheading because he was a Knight of the Garter, and not simply closely connected to King Henry VIII, but related to the King and all his wives, Anne Boleyn was the nearest cousin. Moreover, the King owed his claim to the throne on the basis of Beaufort ancestry, those descended from John of Gaunt’s relationship with Katharine Swinford before his marriage to her who were retrospectively legitimised rather later. Carew’s descent from the Plantagenet’s was entirely legitimate, albeit involving female ancestors, but critically including the Welles, Mowbray’s and the De Clare’s.

Carew was an Esquire to the King, Master of the Horse, and sometime Ambassador to France, where had become close to King Francis, and had earned the confidence of The Pope. He was also a “quangocrat” of his time, who amassed offices of profit, lands and properties. He was a first class tournament contestant, who knew everyone, and who had begun to build a formidable client list. His attendance at the House of Commons seems to have been very patchy, but in many ways he was a man ahead of his time.

When King Henry had lost his strength, but gained paranoia and a legion of enemies, Carew might have been the one to mount a coup, and one of the very few capable of carrying it through to a successful conclusion. If the legitimisation of the Beaufort’s had been reversed, a great deal of our history would be very different. So Sir Nicholas Carew lost his head, but had the last laugh in heaven. King Henry VIII's children left no legitimate descendants, and the Tudor line failed, but Carew’s descendants are all over Burke’s Peerage.

To return to M.P.’s expenses, the interesting question if they were lodged in the Tower of London is whether they should be paid per capita or sine capita?
Posted by Demetrius at 10:23