Isle Of Man - Has Anyone Here Seen Darling? 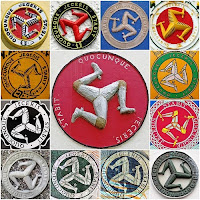 One of the sadder Youtube items recently is the elderly lady wearing a party hat for effect singing quietly straight to camera. She has lost all her savings, with them the bulk of her income, and faces a future of penury and possibly homelessness. The song she sings is “Don’t put your money in the Isle of Man”. Advised by some hot shot investment broker to protect her income and future she put her money into an Icelandic originated caper, this one located on the Isle. There is no protection and no compensation, she, and very many others, have lost the lot.

Emerging from the dust of all this it seems that one consequence of all the money coming and going, too hideously complex to begin to explain, is that in effect the Government of the Isle of Man somehow or other has had the benefit of £250 million pounds or so a year from the UK Government. It has a population of nearly 80,000, so around £3,125 each, whilst its financial services industry generates billions of money rushing through its computers.

In the meantime, the UK now has direct control over the Turks and Caicos Islands, the Cayman Islands (trillions of toxic debt there) is a liability, The Bahamas is on the rocks, or rather sand bars, and now it seems that Jersey, Guernsey and others could be running into very serious fiscal problems of government.

In the good old days the UK would simply have rounded up all the populations, put them on coffin ships, and then dumped them in some of the more blighted and uninviting parts of the world, for example America and Australia without accepting any liability. In the 21st Century, indeed through the rest of it, the UK taxpayer is likely to have to keep these Dependencies, and notably their financial sectors, in the style to which they have been accustomed.

In May and June 1940, the UK invaded Iceland, to protect its interests, and in 1942 the USA who took majority control until 1946. This time round the need for military intervention was less, and in any case we have too much on our plate elsewhere. But it has cost us rather more money than sending 15,000 troops, and major naval forces, and maintaining them. A lot of the bail out money for Iceland has come from us, partly via our commitment to the Royal Bank of Scotland and others.

It has not helped West Ham United much, once an Icelandic colony, but others have certainly been rescued despite being technically insolvent. The RBS has companies that have huge liabilities that cannot be covered. These are run by financiers with close connections to members of our government and they are all hyper active in the property markets. On the basis of what appears to an astonishing lack of interest in the matter by the media, it is my purely personal opinion that certain of these have taken out super injunctions from friendly judges to prevent any disclosure or discussion of what is going on.

As those concerned are, and have been, engaged in ripping off the savings and incomes of as many pensioners as they can get there hands on, it is likely that the sad lady with money in the Isle of Man will not be only one to lose everything. Only you don’t need to go to the Isle of Man, you can just stay at home and let Alastair, Peter, Lord Myners and all their friends carry on with business as usual.