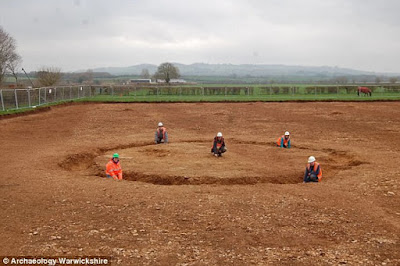 In the Guardian of Tuesday 30 May 2017, Rebecca Rideal has an item "Hilary Mantel was right. Some academics dislike novelists. But why?" dealing with books and scripts on historical topics, for which there is a large and varied audience.

Clearly if an academic feels that someone has taken their work or invaded their field of interest to write a fiction that is imaginative, misunderstood or just plain tosh, they are right to be annoyed. On the other hand if the basic tale is going to be of wide interest then to be perfectly honest and reasonable it is going to happen.

But this assumes, in any event, that the academic is right about either the facts of history or what is derived or assumed from them. We are all familiar with dramas in which the facts are true but only the names have been changed. What if the names are the same but it is the facts that are being changed?

This in The History Blog of 30 May 2017 is an instructive item. As the Professor says, "This is going to change a whole lot about our understanding of the entire Bronze Age." It is not one thing. The science is telling us more and more about the past and often it does not match up with what we thought, assumed or guessed about the past.

Time and again when going into the detail, what some historian has said about this or that is not quite right, does not fit what is into the records and seems to have been too positive in favour of a particular theory. Then there are things that turn up in the dark corners of libraries etc. such as the recent discovery of a manual on Anglo-Saxon polyphony; so it did not come with the Normans.

What the fiction writers can do, when they are serious about trying to depict the past in a truthful albeit interesting way, is perhaps to encourage us to look at other ways of seeing the past. In its way, Hilary Mantel's portrayal of Thomas Cromwell not only told us a little about the then but also about the now.

In an earlier item there is the 22 May report of the findings at Newbold on Stour in Warwickshire. They have discovered a henge and bones that suggest settlement from around four thousand years ago. In the background there is a rise of hills that mark the beginning of the Cotwolds.

We know this view very well. The road through the village is the Stratford upon Avon to Oxford road and a short distance away it crosses the Fosse Way. When I begin to think of all the people who have traveled these roads it is striking not just what we do know but how little.

As for modern history. Who was the footman said to be very close to the then Duchess of Kent, mother of Queen Victoria?