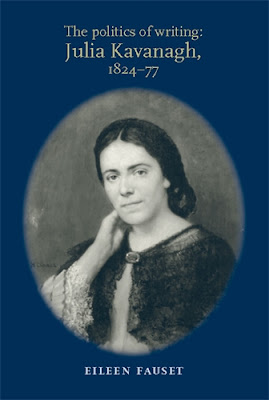 The press has been featuring John McDonnell, Shadow Chancellor and potential Labour leader, who suggests that we might all benefit from reading Karl Marx. This Prussian thinker, he feels, would give us insights.

But Marx, like all of us, derived some of his basic ideas from others, the usual suspects from mid 19th Century and before. Germanic philosophers have been wheeled out as the men to read. If you can get your heads round the ifs and buts.

Again, I point out that it is not these but others. The first is Morgan Kavanagh, antiquary, philologist and philosopher who was Karl's housemate in 1851. The breadth of his knowledge and ideas is astonishing and he would have been an inspiration.

But there is another, Julia, his daughter, 1824-1877, see Wikipedia, born in Thurles, County Tipperary, who might be a better bet. The picture above is the cover of a book about her written recently. What is said is:

Julia Kavanagh was an extraordinarily versatile and significant writer who was held in high esteem by both her contemporaries and her readers.

Like many women writers of the nineteenth century she has since been shunted to the sidings of literary history and therefore, it is not surprising that little is known about her or her work today.

In writing this book my aim is to introduce this gifted but neglected writer to a new audience and to glean, at least, a small insight into her world.

The Labour party is these days is much more Prussian than anything else, and for McDonnell it's a long way to Tipperary. He was born in Liverpool. There were many Kavanagh's there and their relations.

Perhaps he should read more widely.