This One's For John 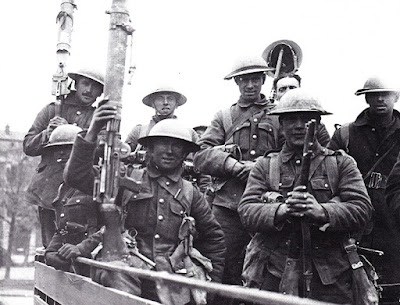 John McDonnell, Deputy Leader of the Labour Party is from Liverpool. I wonder if the Robert McDonnell listed for the 4th Pals, 20th Battalion, Kings Liverpool Regiment in World War is his grandfather? Perhaps, perhaps not, but anyhow, here is their war history below:

Note:  The place names given below are as written; in some cases they may not appear the same on modern maps or other sources.

On 16th October 1914 the battalion was raised by Lord Derby in parallel with other battalions of the regiment, at various locations in Liverpool and district.  The Pals, the 17th, 18th, 19th, and 20th were mustered at Knowsley Park, the family seat of the Earls of Derby, who took their title from the ancient Hundred of West Derby in South West Lancashire and whose family name was Stanley.  The Pals battalions were for War Service only, hence the “Service Battalion” designation.  As equipment and arms were in short supply, as well as organising the officers, there was a lengthy period of preliminary training, before the Pals were ready to move.

On the 30th April, 1915 the Pals moved to Belton Park, Grantham, were they were constituted as the 89th Brigade in the 30th Division for battle training.  Belton House is now a National Trust property, and although there is minor mention of the Machine Gun Corps training there from 1916 onwards the presence of the Liverpool Pals in the previous year and so many of whom were lost in the war has been air brushed out of the history of the House.

The House today is best known as a location for period TV productions; and as a quiet country place that the Duke of Windsor, formerly King Edward VIII and Prince of Wales would retire to with close friends and Wallis Simpson for private weekends.  At one time there were a number of soldiers’ names etc. scratched into the walls of the stable block and working buildings, but these have been removed.

1-11 February trenches, shelling, sniping, grenades etc.
12 February relieved and to Bray and Etinehem
16 February back to Maricourt in trench on 17 February and whizz bangs
20 February Etinehem, then Maricourt
25 February snow

15 July congratulatory messages to 30 Div from Lord Haig, and the Earl of Derby (Corps Commander), Maj-Gen JCM O’Shea promised they would attack again.

The Battle of The Somme has been extensively researched and is the subject of a literature of its own, as well as bitter debate about its inception, planning, conduct, and consequences.  This is not the place to attempt any analysis or comment.  It is enough to say that 30 Div, and the Liverpool Pals attained their objectives early in the day, and with light casualties.  That here and at some other places along the line breakthroughs that were made were not taken advantage of or the attack pressed forward and supported meant that the opportunities were lost.  The Pals Brigade did attack again and paid a heavy price a few days later.

Note:  According to one listing on 30 July 1916 the Pals Brigade, the 17th, 18th, 19th, and 20th Battalions lost 456 men, few of whose bodies were recovered.  There was a high incidence of other casualties, a large number of men sent to the rear and later to England for treatment and convalescence.  Of those who returned to combat some were posted to other battalions, notably the 13th KLR in 3 Inf Div (The Iron Division).

12 October Battle of Flers, a major Army attack by both British and French, 20 KLR advanced in four waves, intense machine gun fire, gained approximately 200 yards and then consolidated.  Note: Over 100 Pals deaths listed for that day.

Note: the attack failed being attempted in the face of heavy shelling, gas, and very wet muddy conditions.  The four waves became confused and losses led to a retreat to the start trenches.

Through the Autumn and winter of 1917 into 1918, the brigade were in general service in the Ypres Salient, and the 18th were merged with the Lancashire Hussars as it was then accepted that cavalry units were of limited use.

There was no other major battle, although there was involvement in some trench raids, and casualties occurred as a consequence of general shelling in the Salient.  At Christmas the 20 Bn were at Swan Chateau, and then at Reninghelst.  During the seven months spent in the Ypres Salient 540 men were lost, and three times that number wounded.

In early 1918 development in the political situation at home meant that fewer troops were being sent from England, and a number of reorganisations had to be made both for the new conditions, and in anticipation of a German offensive.  This was known to be likely, as Russia had surrendered on the Eastern Front, allowing their troops to be moved to the West, and the Americans had yet to deploy their forces.

Consequently, on 8 February 1918 the 20th Battalion Liverpool Pals were disbanded at Chauny, East of Noyon, and their surviving men posted to the remaining KLR units.  Although most Pals were demobilised not long after November 1918, the 17th were unluckily enough to be sent to Northern Russia in the Murmansk Expedition to protect British interests during the Russian Revolutionary war.