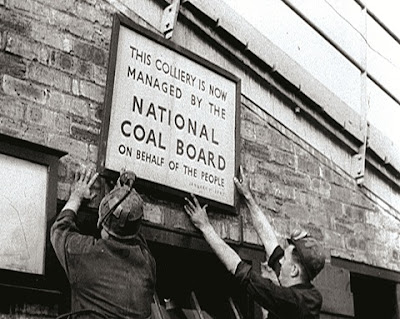 The word "nationalisation" has returned to the political debate, just when we, almost, had begun to forget about it. As we no longer have a coal mining industry or much of an iron and steel one they are no longer in the frame.

We do have "privatised" ones, or now rather corporate ones. Also, the word seems nice and simple for a politician to tell the public that the government will triumph.

This item by Ken Craggs in the site "Orphans of Liberty" reminds us that a socialist cabinet in the throes of nationalising major industries in the late 1940's did not find it easy. In fact, quite the reverse. Just who took the decisions, notably the hard ones?

They almost seem muddled and uncertain as to what actually they were doing. A little later, still in the age of steam, I did some work on the Railways. Then I lived and worked for many years in coal mining areas. The work involved a good deal of contact with the NHS.

It was never entirely clear who was in charge or how actually the decisions were made, except that government claimed the successes and the lower levels, who actually did the job, or attempted to, were left with the failures. In the picture above, who exactly, were "the people"?

It might be all academic if the dire forecasts in this item in Zero Hedge are anywhere near correct. Essentially, you ain't seen nothing yet is the message, which is that the age of oil is coming to an end. And shooting the messenger is not the answer.

Nor is nationalising the sectors of the economy headed for rapid decline.