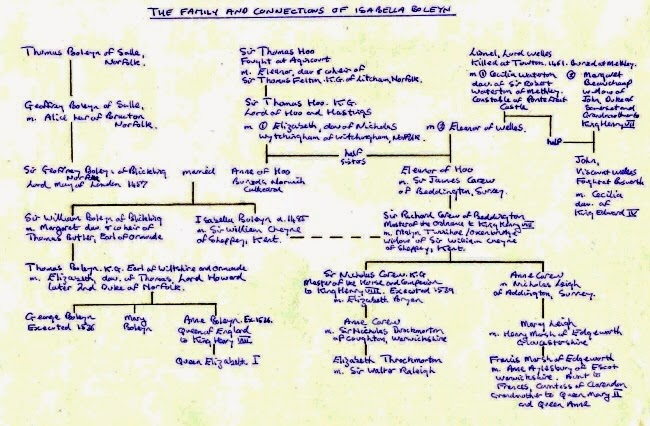 We decided to give "Wolf Hall" a try, boxing it just in case I hit the ten minute "that's enough" barrier that often happens these days.  We lasted the hour; the fact that it was yet another Tudor item was a concern.

It is a world so far away from our own that it passeth all understanding, which is why much criticism can amount to nit picking.  Sadly, this is not  an awareness of the ubiquity of lice and fleas etc. at that time, but looking for minor errors and such.

There are some interesting touches.  When Richard late in the episode, son of Thomas Cromwell's elder sister Katharine of her marriage to Morgan Williams, asks if he might take the name Cromwell we know that the later Oliver Cromwell, Regicide and Protector, would be his great grandson.  This might emerge later.

Although much is made of the humble origins of some of the people, notably Wolsey. Cromwell and other, they may indeed have been "trade" but are rather more businessmen, aka merchants, who did very well, survived and married into families of higher degree.

I doubt if Cromwell's father did much shoeing of horses, if any, it looks more like one of those biting jokes they went in for those days when the sense of humour was more robust.  To take the Boleyn (Bullen) family, said to be lowly.  There was a triple whammy of marriages into the greatest in the land.

Look at the picture above and you will see some of the great magnates of the earlier century in the marriages.  The Hoo and the Welles failed in the male lines and serious money went down to the daughters as well as fine lineages.

Not only did all six of Henry's wives descend from King Edward I but so did his known mistresses as well.  He is portrayed as a serial womaniser, it may be that there were a number but he was fastidious in his choices.

If the series does command and hold a large audience one intriguing feature is the large numbers of them who have a connection to these major families of the Tudor era and are not aware of this part, if only a very small part, of their family history.  If you run the numbers then you can see how this might be possible.

There are two routes, one back through the generations and the other down from the relevant and related families of the period.  The period is around 15 to 20 generations back allowing for slippage between older and younger people in one or another.

Even allowing for the usual inter marriage among particular networks of families among classes or localities at four and a half centuries back at the time of King Henry VIII you will have thousands of ancestors alive at that time.

The numbers are such that they cannot be confined within limited groups either in terms of place, class, religion and others.  If you were able to trace them all you would be in for some surprises and not all ones that may suit you.

In the period in question there the Royals and near Royals, much given to mutual attrition.  But enmeshed were many minor aristocracy, higher gentry, lower gentry and a raft of rich persons in various fields.  The result is a number of family networks and these in turn connect.

Typically or statistically, by the time you get back to the early 18th or late 17th Centuries the chances of having one are increasing sharply.

This means inevitably that among the viewers seeing this strange and inexplicable Tudor world they are not looking at something apart from them, there is someone or more swinging through the branches of the family tree.  They may be in the field or kitchens or servants, but they might be at the high table.

It works the other way as well.  The late Queen Mother had some decidedly rough looking Derbyshire lead miners and other northern industrial families in her ancestry as well as Staffordshire and Lancashire gentry.